Six months after the October 3rd, 2005, annular eclipse (see the complete report), here comes a total eclipse, the second in my observing record after the last one of the 20th century (1999). This time, the Moon’s shadow path starts in eastern Brazil, quickly dives into the Atlantic Ocean and touches back ground in Africa on the shores of Ghana. Then, it cuts its way through the African continent from SW to NE across the Libyan desert and skims Egypt’s farthest NW corner; later on, it “sails off” into the Mediterranean sea and lands in southern Turkey. Finally, its track goes on in the very heart of Asia, passing over the Caspian Sea, Georgia and dying out in Mongolia at sunset.

The maximum length of totality is known to take place in the Libyan desert; this region, along with northwestern Egypt and southern Turkey near Antalya, features the best tradeoff between logistics, accessibility, distance (at least from Italy and Europe), and weather statistics, the real bugaboo of every amateur astronomer! After careful evaluation, I finally make up my mind about joining a guided tour set up by the Gruppo Astronomico Tradatese (near Milan, Italy) amateur astronomy club. We will go to El Sallum, a coastal village located in northwestern Egypt at a stone’s throw from the Libyan border (approximate geographic position: lat. 31° 35′ N, long. 25° 07′ E), where we expect to enjoy a 3m 56s totality phase, or about twice as long as the August 1999 eclipse. (Maps (C) Jay Anderson, Fred Espenak and Magellan Geographix):

Our group counts has about 35 participants coming from all over northern and central Italy and with a very wide range of “eclipse attitude”: from the die-hard eclipse chaser (like myself :mrgreen:), to those who just liked the idea of an unconventional tour peppered with the sighting of a wonderful natural event. All in all, I must say this journey was real fun, non only for the eclipse, but also thanks to my wonderful travelling companions! The memories from this adventure will last for a long time…

We will leave on sunday, March 26th, from Milan Malpensa airport: ehm… maybe we will. After boarding all passengers, one turpoprop won’t start by any means. So, we wait more than three hours in the aircraft while the technicians strive to fix the failure. Much to our relief, we finally manage to take off, and when we arrive in Cairo very late in the night, we can’t help but kiss the ground, like Chistopher Columbus supposedly did when he touched ground from his two-plus month voyage across the Pond!

The 27th of march is our first day on Egypt land: while sightseeing the wonders of Cairo, a thick layer of unpleasant clouds roll in over the city, which is soon flooded by a cluster of severe thunderstorms. Our egyptian guides point out that since it hasn’t been raining that much, downpours must have stalked us on our way from Italy…

In the evening of the 27th March, another group of about 50 eclipse chasers on a second package tour (always arranged by the GAT astronomy club) join us on our endeavor. The next day, the 28th of march, we leave for Marsa Matruh where we arrive in late afternoon, after dropping by the war memorials near El Alamein, where one of the most cruel battles of World War II claimed the lives of thousands of soldiers. A broken cloud cover driven by a steady northwest always accompanies us along our route, seemingly making fun of our hopes. The long eclipse eve ends with the last debriefing by the astronomy club president, C. Guaita.

Here comes the E-day (29th of march)!. The alarm clock wakes us up before 3:00 am, since we still have a 200-plus km ride to El Salloum. The sky over Marsa Matruh is clear and starry, but again, we come across quite a few pesky clouds on our route, just a few hours from first contact! We finally arrive in El Salloum around 6.00 am: the sky is clear, but a thick, cotton-like fog covers the plateau rising just behind the town.

Shortly after arriving, we learn that our final destination will be up there, on the foggy plateau! What the heck… why couldn’t we just stop here near the seaside, where we would surely enjoy a crystal-clear sky? But we can’t set up here, because we have to join all other fellow eclipse observers in the camps prepared by the Egyptian authorities, whose organization will later turn out to be very effective. And we have no other option, since the location has already been assigned. Much to our surprise, the plateau is not exactly as dry as we would expect from a desert: instead, the heavy rains from the previous days turned it into a muddy, lonely moor, where buses and trucks easily get stuck. This scenario is more typical of northern latitudes countryside!

Furthermore, as can be seen from the above picture, those cotton-like clouds coming down the cliffs were nothing but a dense layer of fog spreading all over the the plateau, where everything (buildings, tents, and the sparse vegetation) is soaked with heavy dew. At sunrise, some light rays manage to claw their way through the fog, but they are not strong enough to dissolve it.

At about 8.00 am, while keeping our fingers crossed, we set our gear up. Finally, as time passes by the solar radiation increases, and starts poking holes into the fog layer, that grow bigger and bigger until the sky clears completely by about 10.00 am. And thanks to the same cold front whose rain brought the fog along, now the sky sports a bright transparency which is probably uncommon for desert lands, where aerosols and dust normally make the air much more opaque.

Below is a selection of my best pictures. All of them (except for the wide-field composite) were taken at the prime focus of an ED80 semiapo refractor (80 mm aperture f/7.5) with a Canon EOS 300D DSLR at 100 ISO.

So, as quickly as it began, the totality phase comes to an end. It took our breath away for almost four minutes, which are now gone and can be brought back only through our recollection and our pictures; for four minutes we stood in awe contemplating one of the most incredible natural phenomena. No description on earth, no picture, not even any recording whatsoever can convey the same excitement and emotion as a total solar eclipse!

Furthermore, a solar eclipse does not mean only the totality phase, but there are also a host of collateral effects to it: from the very elusive shadows, which I never managed to see, to the well-known sickle-like shapes that can easily be spotted when the sunshine peeps through a holed surface or a tree’s foliage. I must admit this time I didn’t prepare to image or observe any such side phenomenon: during totality, I spent the first two minutes in a shooting frenzy; then, I just had some rest and watched the eclipse. Our attention is too often drawn by high-tech gizmos, and it’s time to get back to using our naked eye as the main instrument to admire either the shining beauty of Venus or the strange color of the horizon, which appears reddish no matter where we look at…

Another typical effect of totality is the temperature drop. It depends on quite a few factors: initial temperature, atmospheric condition (wind, humidity, etc.), time of the day, and so on. I’ve heard reports of temperature drops of more than 10 °C in the Libyan desert, most likely thanks to the dry climate and strong heating of the sand from solar radiation.

Our location can be considered to have an overall desertic climate, somewhat mitigated by the sea whose waves break onto the shores only a few kilometers away. And moreover, the presence of fog until relatively late in the morning and the steady northwest wind (which, if I’m not mistaken, weakened a little around the totality phase but never subsided), probably played a key role in preventing steep temperature increases.

The above graph shows a temperature drop of about 5 °C, partially offset by the increasing trend due to normal daytime thermal excursion. My graph actually has a flaw: due to the atmospheric thermal inertia, the temperature “trough” should normally be detected about 10-15 minutes after totality, not during it as is the case with my chart. This difference from the normal (and correct) behavior (see also Lorenzo Comolli’s article) is most likely due to incorrect placing of the thermal sensor (i.e. not completely in the shadow), which was therefore heated by incoming light rays immediately after third contact.

Below is my setup:

I managed to see and image the eclipse until the very last teeny weeny bit of Moon leaves the Sun’s disk blank once again. Just the time to pack the gear back up, to have a very quick meal, and we are sailing off to Alexandria, where we finally get by the late evening.

On our way to Alexandria, we find the time to greet our setting Sun. After all, the show’s leading star (:mrgreen:) fully deserves this tribute! 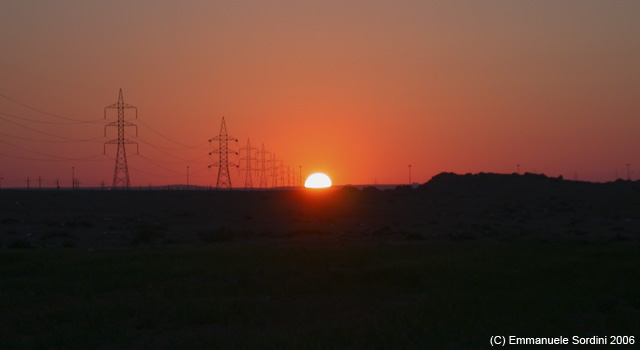 When back home from this wonderful journey (which, by the way, continued until sunday, 2nd of april, as a very nice sightseeing tour), I owe many thanks to:

This solar eclipse was observed by thousands of people from throughout the globe who flocked mainly to Libya, southern Turkey and El Salloum, our location and probably the most crowded observing site. Below is a list (however incomplete) of other fellow eclipse chasers who decided to share their work and impressions. Some of them were either travelling companions of mine, or were in El Sallum but we didn’t manage to meet; some others saw the eclipse from somewhere else. But no matter what their location, the “eclipse fever” is always the same!