Once Upon A Time There Was…

It’s not easy to say when and how my passion for computers and sciences in general (but above all, astronomy) took shape.

Once upon a time in the early eighties there was a ten-year old boy (me!) who pointed an old rusty pair of binoculars up in the sky: I found the Pleiades and it was “love” at first sight with the starry sky. I recall it was a cold winter night, and the observing spot was just a small terrace on top of my apartment building. A long time has passed since, I have grown up but I have never forgotten that night. Of course, everyday’s life often diverts my attention to other activities, yet I still think of astronomy as an importanr part of myself. On the whole, I’ve been into astronomy for almost forty years now, and counting!

At times, when I can drive far away to a dark sky location, I like lying down on a mat and looking up at the milky way, or pointing my gear at some “challenging” object, e.g. a galaxy or a nebula. I have continued practicing this rewarding hobby as time, finances (it’s a very expensive activity if you want to achieve decent results!) and other duties have allowed it. I am often asked what those fuzzy patches of light mean to me: I’d answer that looking at those objects is as thrilling as if it were me who discovered them for the first time! And sometimes, the vastness of the universe just puts mankind's conceit into perspective.

I think astronomy is a wonderful way to come in close contact with Mother Nature’s stunning wonders. I only wish I could convey these sensations to everybody: but except for a handful of fellow amateurs, it really looks like the dedication amateur astronomers put into the study and understanding of the night sky is generally regarded as a little “awkward” to say the least.

Once upon a time I also dreamed of becoming a professional astronomer, but later I pursued another career. There used to be an old webpage of mine dating back to 1997, but I did not update it in a very long time. Then, in 2002 the "nice buddies" at GeoCities zapped it forever from the digital world. It was only in late 2004 that I made up my mind about rebuilding a web page of my own. In 2006 I made a blog-like version using a Java-based blog engine, Pebble. Then, in 2013 came the first Wordpress-based version, and finally in 2019 the revised, Wordpress-based mobile-friendly webpage you are currently looking at.

So, bottom line: computers and astronomy are my favorite topics. They are very rewarding and provide a wonderful opportunities to both increase my technical knowledge and keep an eye on the ever-changing universe in which our tiny planet lies stranded, somewhere.

Thank you so much for stopping by and having a look at my little "patch of starry sky". 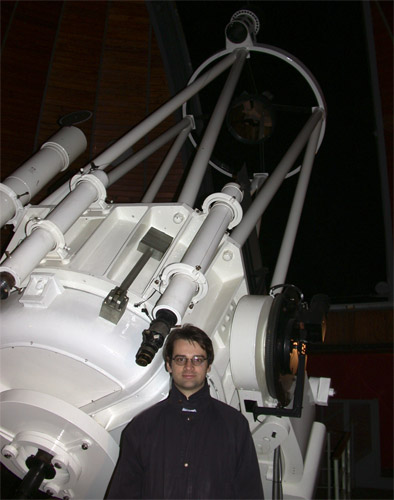 Myself at Merate Observatory (Italy) next to the 1.34-meter f/12 Ruths Cassegrain Telescope (January 2003)

You can contact me at the following e-mail address: emmanuele_AT_sordini_DOT_com

(Please make sure you replace “AT” with “@” and “DOT” with “.”) or through the contact form available on this page.