These photographs, text and web page designs are © Copyright 1997 - 2023
Emmanuele Sordini, unless otherwise noted. All rights reserved.
Contents may not be reproduced, published, copied or transmitted in any form, including electronically, without written permission of the author.

In the first week of November I made a short trip to Cyprus, where I had never been before. Even if my trip was mainly meant for leisure, the serious amateur astronomer always has some room in their suitcase for a lightweight setup.

Cyprus is an island in the eastern Mediterranean Sea with a total area of 9200 sq. km. and a population of about 1200000, concentrated mainly in the urban areas of Nicosia in the central plain, Larnaca in the southeast, Limassol in the south and Paphos in the southwest. The presence of these urban areas causes light pollution problems, even if there still exist spots with good dark skies. After careful inspection of the map from lightpollutionmap.info (see figure below), two darkest areas can be found:

Also interesting is the central part of the island, comprising the eastern portion of the Troodos massif, its highest summit (Mt. Olympus, 1950 m el.) and the valleys “scarring” the slopes of the massif from the Nicosia plain up to its peak. This area offers easy access and good skies especially at the zenith, comparable to those that can be found in the Apennines Mountains in Northern Italy with best SQM readings around 21.3-21.4. The downside is that the view to the east is affected by light pollution coming from Nicosia. 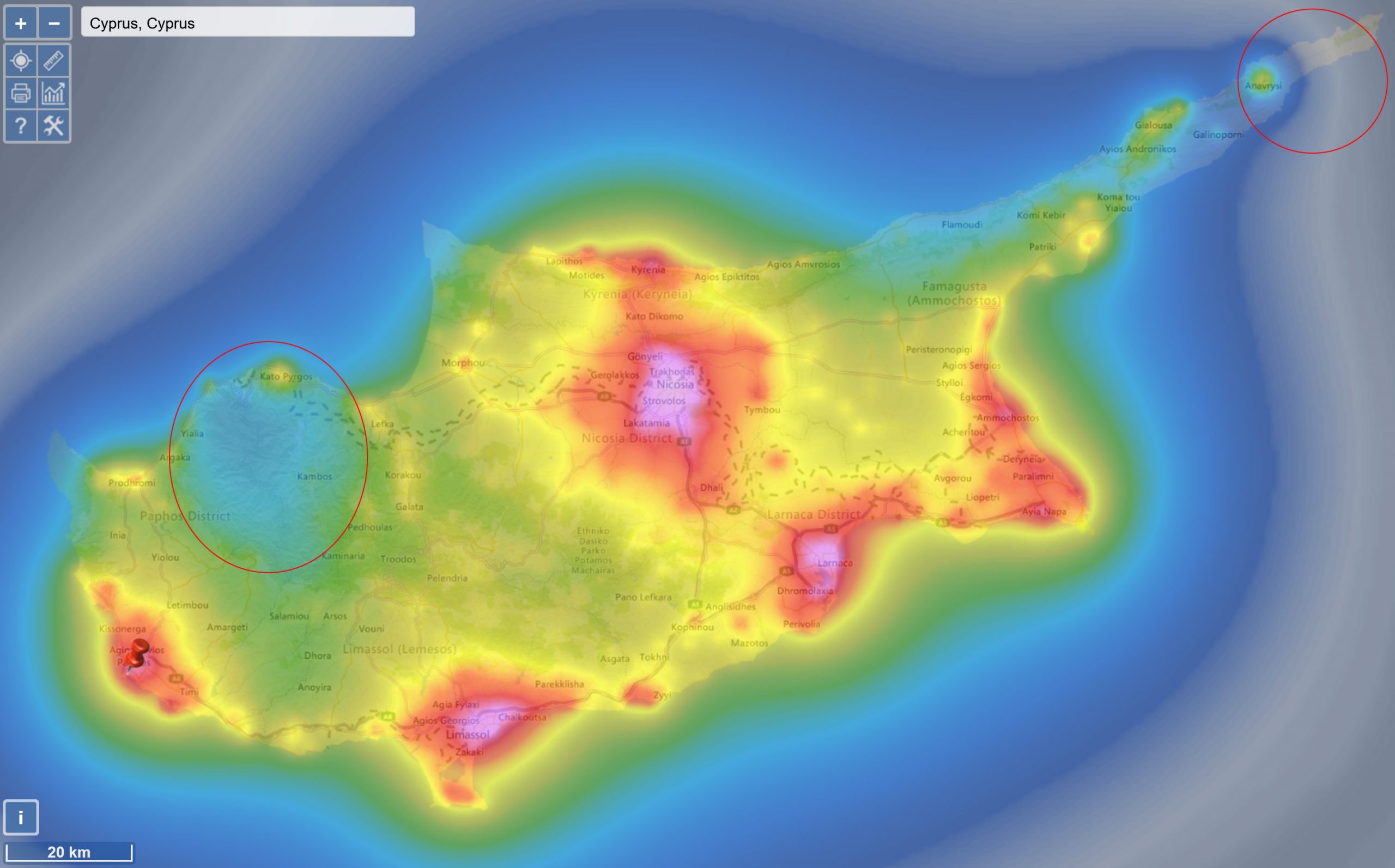 The largest dark area in the island, the one corresponding to the Paphos Forest, is unfortunately not so easily accessible, with winding roads and a dense forest with very few spots offering an open view. Additionally, lying on Troodos’s northern side, the view to the south is largely obstructed by the mountains. I inspected three spots:

The first site I visited on the night of 3rd-4th November is the darkest of the two I went to, with a very dark sky (SQM-L reading 21.65 at the zenith), an open view and a pitch-dark sky all the way down to the northern horizon. The view toward the other cardinal points was also very good, but was also obstructed by nearby peaks up to an elevation of 25-30 degrees, especially to the south. 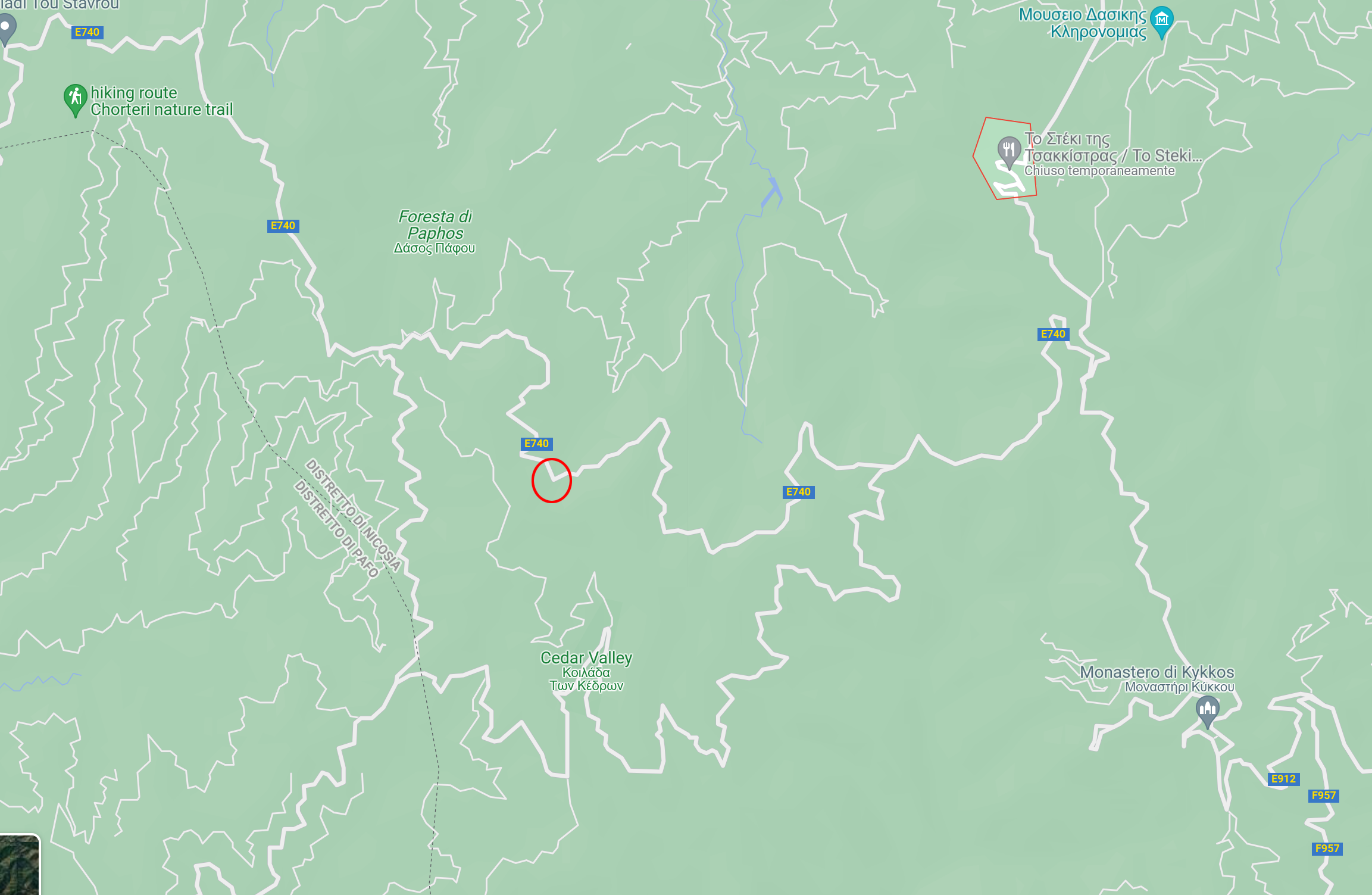 The three hours I spent at this site were partly ruined by the high humidity caused by the rains of the preceding days, which also caused dew buildup on the front of my telephoto lens. As a side note, Kykkos Monastery is a very beautiful place of art and worship, but is plagued by a host of bright lights, some which even shine bright green. What on earth is this cr*p for?

The second site I inspected, but only in daylight, is a wide flat area built within a large bend along road B9. Looks like this was built by a Cypriot amateur astronomy club. There are no fixed installation but it looks like the site is meant for public events, as can be inferred from the presence of a panel with a sky chart and a restroom. 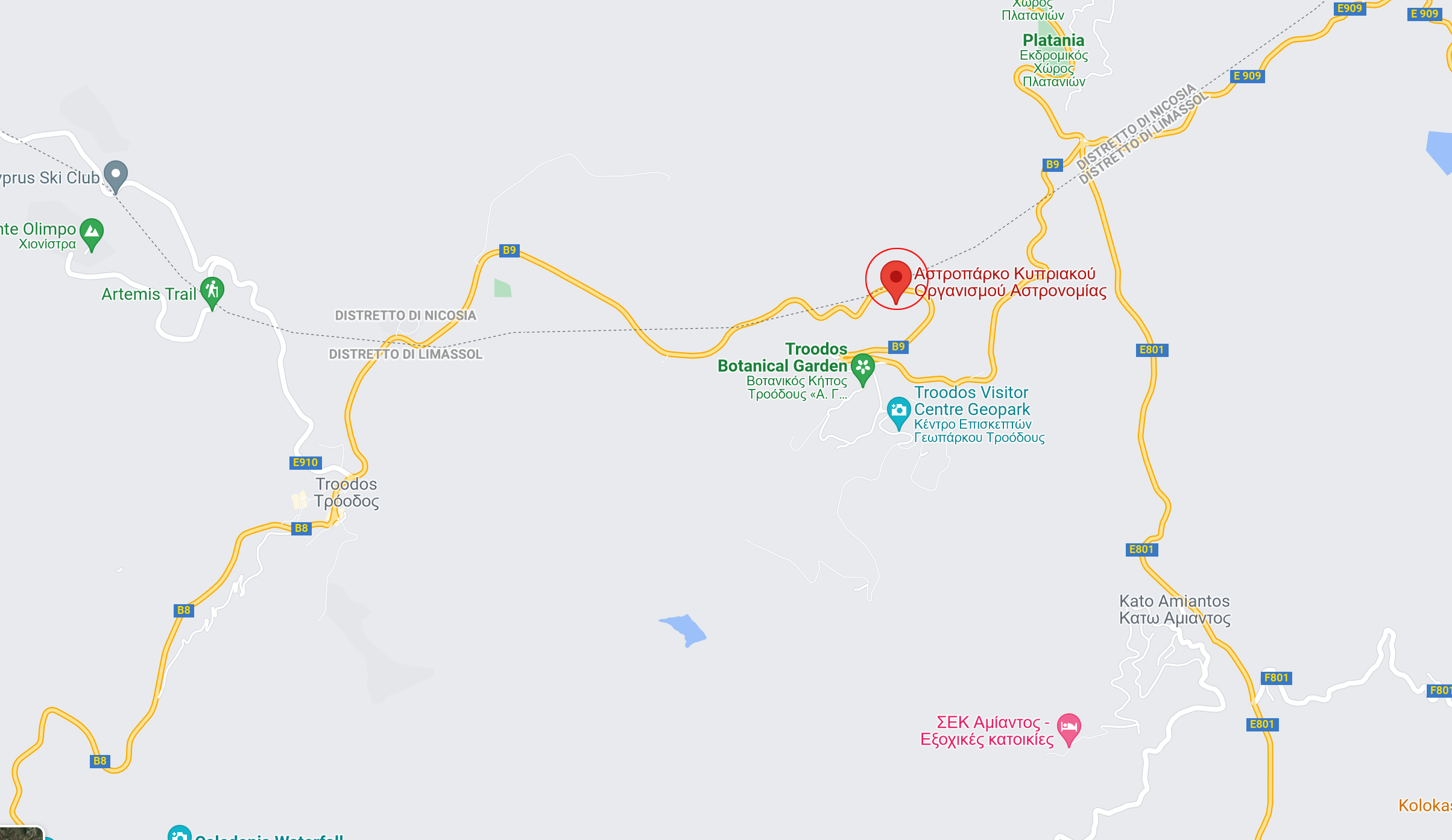 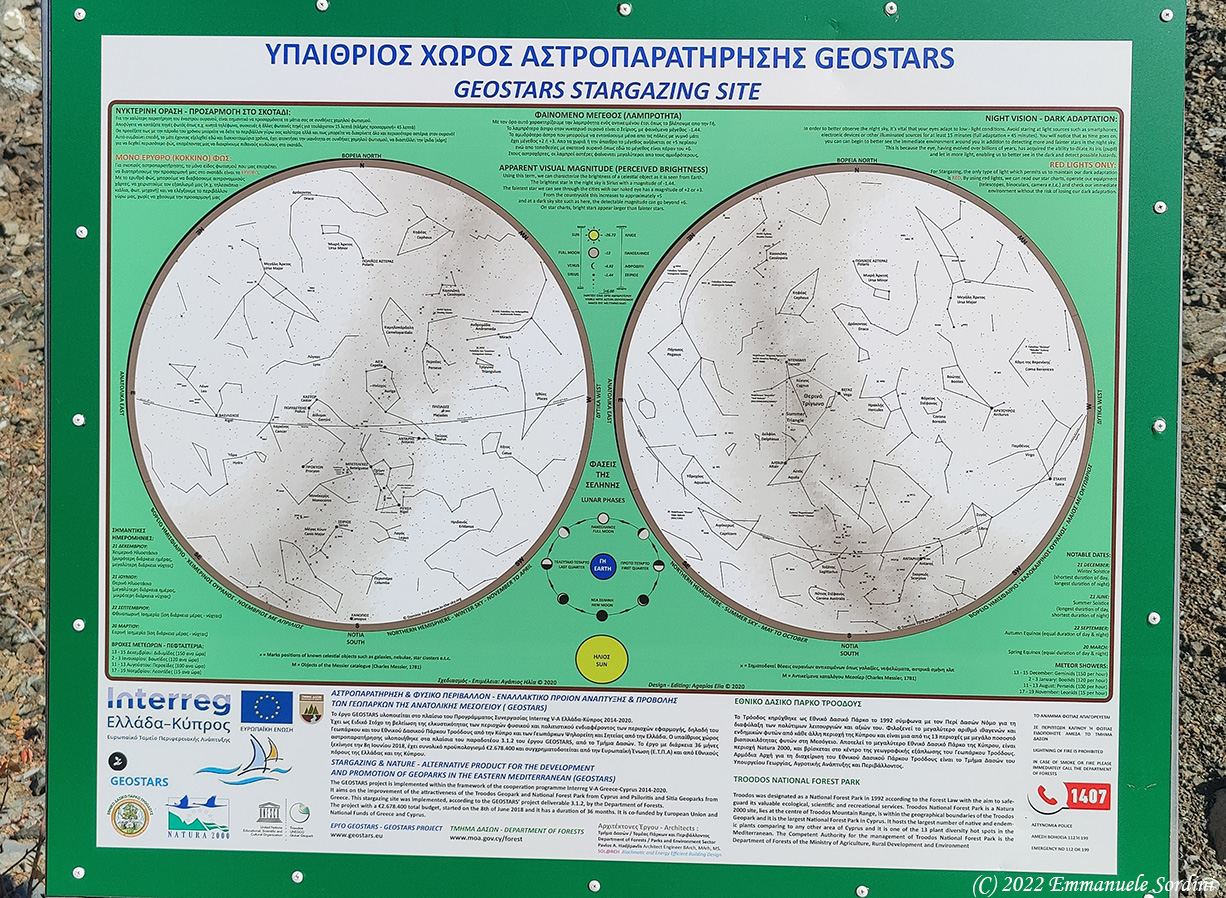 The following evening (4th-5th November) I was downtown Nicosia. Not fully satisfied with the first observing night, I decided to try my luck again. The astronomy club site was too far away at about 1h20m drive, so I looked for somewhere closer. After a quick search, I found a reference in a forum mentioning Xyliatos Dam, at about 50 mins’ drive from Nicosia: 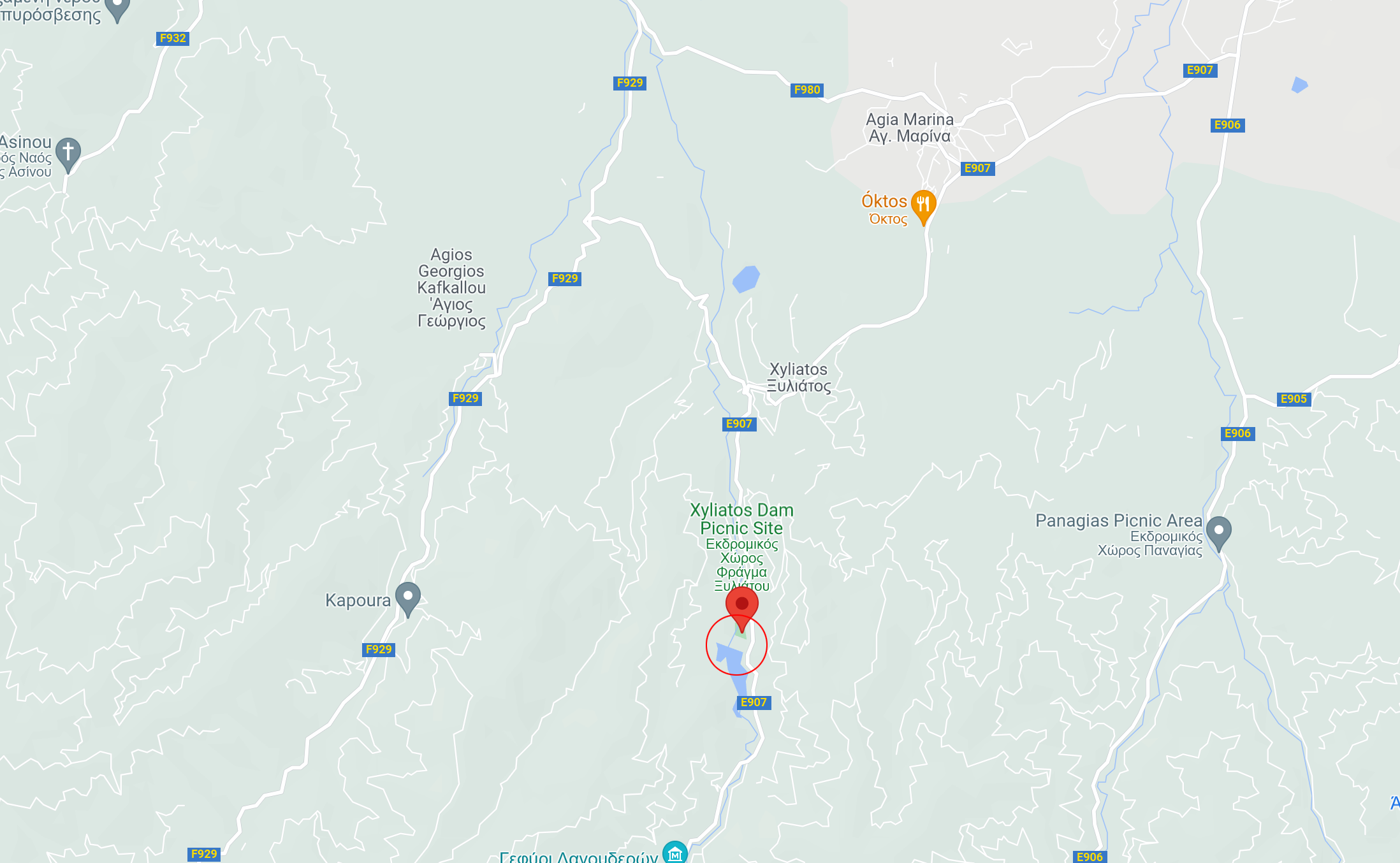 This dam, delimiting an artificial basing at about 700 m elevation, has a picnic area, but the best view can be enjoyed on the dam itself, which is open to vehicles. Setting up at the other end of the dam, I found myself far enough off the main road, and with no light sources nearby, at least from what I could see on that night. The sky at the zenith is reasonably dark (SQM-L: 21.45) but the view to the east is plagued by Nicosia’s light dome. The conditions at this spot are very similar to those that can be found at the sites in Northern Italy I usually go to, such as the Northern Apennines or the Aosta Valley. Additionally, the humidity was much lower on the second night, which spared me dew buildup on my lens.

I had a quite basic setup consisting of a photo tripod, a Star Adventurer, a Baader-modified Canon 6D and a 135 mm f/2 Samyang lens used wide open. Note to self: the Samyang is a very good lens with an unbeatable price/performance ratio, but it has to be stopped down to f/2.8 or f/4 when used together with full-frame detectors, as stars look very bad especially toward the edges of the field.

I took three pictures. On the first night I pointed my lens toward the Lambda Orionis area, a bright star association in the northern part of constellation Orion surrounded by a dim but vast (about 8° in diameter) emission nebula also known as Sharpless 264 or Sh2-264. I took 78 90-second frames of that target, about half of which were affected by dew on the front lens.

On the second night I imaged the area around Aldebaran and the Iades open cluster (37 x 90 s exposures) and Perseus and California Nebula (90 x 90 s). All subs were acquired with the above mentioned Canon 6D at 1600 ISO and my 135 mm Samyang lens.

Click on each picture below to open a higher resolution version. Each image has an “I” icon showing a sidebar with all the acquisition details.

To sum up, I can say that decent skies can be listed among the attractions Cyprus has to offer. The climate is mild with a high number of clear days (and nights), and roads are in very good condition (far better than the ones found in Italy, especially in the Apennines), thereby ensuring easy access to all observing locations. My only concern is that population and urbanization seem to be on the rise, and this will very likely imply an increase in light pollution. Let’s hope the local authorities will be able to find a balance between development and preservation of the sky, a precious but highly endangered asset.