It’s been quite a while since my last post, let alone an astronomy-related one. However, this does not mean I don’t have anything to share! As a matter of fact, I do have a fair backlog of images to process and to post, but it’ll take a while as I’ve been very busy lately. Here’s a sample of my october 2007 deep-sky imaging session (NGC 253, a galaxy in Sculptor): 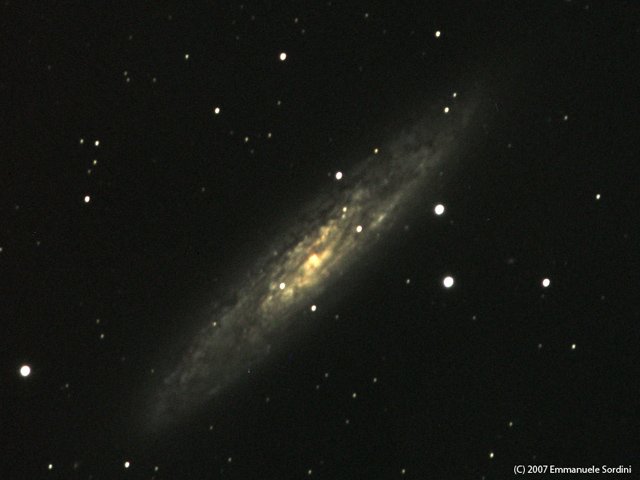 which is actually my best result of that night… Click on the link below for the full story!

On October 13th, 2007, I went out in the Ligurian Apennines for a deep-sky imaging session together with a few friends of mine, one of them being the well-known italian amateur astronomer Lorenzo Comolli. After a successful double-nighter back last September during the Saint Barthelemy star party which was held in the Italian Alps (Vallee D’Aoste), this time I had planned to do a lot of CCD tricolor and LRGB H-alpha work on a wide selection of deep-sky objects, including a few galaxies and some nebulae. My main scope for deep-sky work is a Skywatcher ED80 refractor used with an Atik 16HR CCD.

That night the air was still, but very damp especially at low elevations, and my observing location which lies at about 1400 m above sea level was barely above this thick laver of haze; in such cases, dew easily condenses in no time all over my equipment (which actually happened).

My first target of choice was NGC 253, a galaxy located in Sculptor. In mid-October it reaches it culminates in the evening: it’s not really a difficult target, but given its low declination (-25°), there’s no room for a second attempt in the same night for mid-northern latitude observers. Actually it came out quite nice with L:R:G:B 20:5:5:5 minutes of exposure.

Then it was NGC6992’s (Veil Nebula) turn, where I managed to pull off a few 10-minute frames. Here I was dumb enough to forget changing the color filters, so that all exposures of the Veil nebula were actually acquired only in the R channel (40 minutes through an Astronomik R filter): 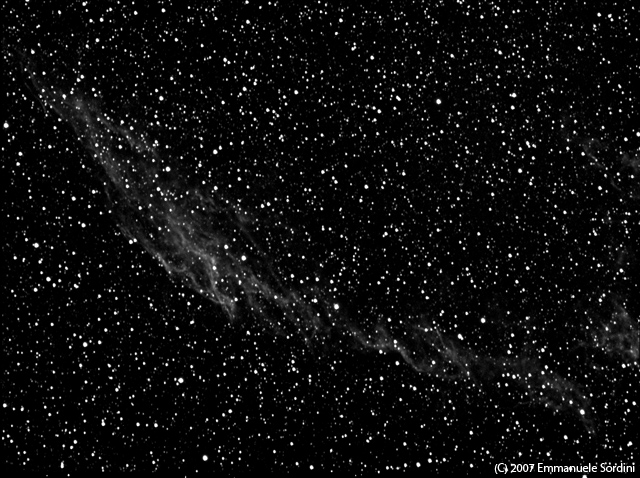 But unfortunately, the worst still had to come. As the temperature had lowered since the beginning of the imaging session down to a few degrees °C, my Trust USB frame grabber (used for autoguiding) froze up on me: I tried to heat it up several fimes, but it would only work for another 10 minutes before freezing again. Then the idea came to mind to keep it warm by placing it near my laptop’s exhaust fan vents; but in the meantime, it was already well past midnight.

However, Mr. Murphy decided it was not enough: the autoguiding system ceased to function properly, and by no means did I manage to get it to work properly. I spent over two hours on several attempts, such as changing software, guiding interface, etc) but to no avail, as it would always go nuts (i.e. diverge) just a few seconds after starting the autoguiding cycle. I gave up and spent the rest of the night stargazing the good ol’ way before freezing up myself 🙁 .

I still have to figure out what exactly went wrong that night, but for sure I gotta get rid of that chilly grabber, and a major overhaul to my autoguiding rig is at the top of my to-do list!