Hello everybody! This is my first post to the new and revamped version of my website. Enjoy!

The only total solar eclipse of 2019 took us to the southern hemisphere. Most of the totality path lay in the deep of the Pacific Ocean, offering no chances of viewing. Only at the far end of the path would Earth’s shadow make landfall, treating a small area of Chile and Argentina to a late afternoon eclipse.

Despite all that, I decided to take on the challenge, together with some friends.

After careful planning of logistics and study of weather prospects and patterns by using different sources (including Jay Anderson’s website, one of the best), together with five friends of mine (Marco Cardin, Liborio Ribaudo, Lorenzo Burti, Carlo Dellarole and his wife) we finally opted for Chile, close to La Serena. Argentina would actually offer slightly better weather prospects: however, the eclipse would take place too low above the horizon, 9-10 degrees vs. about 13 for Chile.

Chile is a narrow strip of land between the Pacific Ocean and the Andes range: therefore, there is far less mobility than that available in the USA for the 2017 eclipse. There are a few mountain passes on the Andes, but being at 4000+ meters’ elevation they are all closed in the winter. Therefore, crossing into Argentina in case of unfavorable weather was not an option.

Our trip was divided into two parts. We would a few days around La Serena for the eclipse, then we would fly to the Atacama desert in the north to visit the area and hopefully observe the gems of the southern sky.

We set out on our journey on Friday, 28 June, when we all flew from Italy to Santiago de Chile via Madrid, and then to La Serena, where we finally arrived in the afternoon of Saturday, 29 June. At the airport of Santiago we ran into many tourists who all flocked to Chile for viewing the eclipse, mainly from North America but also from Europe.

The whole day of Sunday, 30 June, was devoted to exploring the area and to finding a suitable spot as close as possible to the centerline. The whole region was getting ready for the event and several hundred thousands of people were expected to come to the area, with most of the crowd likely heading to the Elqui Valley and Vicuna. For this reason, the local authorities set up a circulation plan in order to cope with the expected surge in traffic.

Somebody from our group even came up with the idea of staying in La Serena, which also lies in the totality path: this would allow for gorgeous views of the partially eclipse Sun setting on the Pacific Ocean. Trouble is, La Serena is located along the shores of the ocean, which exposes it to the risk of low cloud layers that often build up on the cold sea and drift onto the coastline. Secondly, totality would be 14 seconds shorter than on the centerline, a wealth we just could not afford to waste, the maximum total duration barely reaching 2.5 minutes.

After spending the whole day exploring the area, we finally chose a spot near La Vinita Alta, located on a plateau north of La Serena at around 1300 m elevation, about 1h30m mins’ drive from the city, about half of which on dirt roads. The spot was very fit for our purposes, lying very close to the centerline, with an open 360-degree view, at the following coordinates: latitude 29°48°18.5” S (29.80514), longitude 70°51’04”.5 W (70.85125). The terrain was quite smooth, with a desert highlands climate and sparse vegetation mainly consisting of low shrubs. We also learned that a very hippie-looking, five-day music festival (https://andeseclipses.org/) would take place a couple km north of our spot of choice.

Monday 1st July was a day of preparation, fine tuning and testing. I re-tested my Eclipse Orchestrator script, and had to make some corrections because the original planning done at home used a nearby location as a reference with just a 2-second longer duration. This tiny difference would have been more than enough to screw things up (!).

As far as the weather was concerned, we left Italy with so-so prospects. Fortunately, the forecast got better and better with time, so we were very confident in this regard.

Tuesday, 2nd July, was “E-day”. We decided to leave La Serena in the wee hours around 3:30 am local time, in spite of the eclipse taking place in the afternoon. This early start had a twofold advantage in that it would allow us to “dodge” the traffic and to reach our destination still in the deep of the night with enough time to polar align our mounts. Therefore, we got there at around 5:30, so that we could carefully choose the final observing spot and set up with plenty of time ahead.

Time passed by smoothly, and the area never got too crowded. We had a group of nice Chilean bikers a few tens of meters from our spot, and some other people farther away. Despite having enough time, setting up our complex gears kept us rather busy through the whole morning and the early afternoon. Here are a few shots of our observation camp:

My imaging rig was practically the same as the one used for the American eclipse in 2017. The main scope was a Pentax 75 SHDF refractor (500-mm focal length, f/6.7) with a Canon 760D DSLR, controlled by a PC running Eclipse Orchestrator. Then, a Baader-modified Canon 6D DSLR attached to a Canon 100-400 L IS II zoom lens (@250 mm focal length and f/5.6) was used for wide-field imaging. The actual imaging was performed via a LUA script ran by Magic Lantern. The only difference from 2017 was the mount (a Skywatcher EQ5 in place of an old, rickety Vixen GP).

Early July is the deep of the southern hemisphere winter. One would expect cold temperatures this time of the year at the elevation of the plateau. Nevertheless, we were treated to a spring-like, perfectly clear day. No cloud whatsoever was spotted during the whole event.

The first part of the day saw us super busy setting everything up, so time went by faster than one could have imagined. At 15:23:20 local time (19:23:20 UTC, 21:23:20 CEST), we spotted the first “dent” in the solar disk, which marked the start of the partial phase. The Sun was about 23° high above the horizon, which produced very long shadows and a subdued ambient light. As I already wrote, it was my first eclipse I observed so close to sunset.

The partiality phase lasted about one hour, with all of us anxiously awaiting the big moment. Then, at 16:38:35, the Moon obscured the last solar rays: totality! Despite having witnessed seven solar eclipses, I couldn’t help screaming in joy and awe! The low height above the horizon, about 13°, “lent” the whole phenomenon a really particular and mysterious appearance. I found the time to enjoy views of the eclipsed Sun through my binoculars and the telescopes brought along by my friend Marco Cardin, while two cameras were shooting tons of frames J.  Several stars and planets such as Syrius, Canopus and Jupiter were spotted in the sky. One important observation worth pointing out: for the first time in my life I managed to spot shadow bands on the trunk of our white rental SUV.

At 16:41:06 local time the diamond ring “announced” the end of totality that as usual lasted too short. The Sun had become even lower above the horizon. The Sun, still partially eclipsed, set behind a foothill in the distance, so that we missed the fourth contact.

In spite of the low elevation above the horizon, a crystal-clear sky enabled me to get some decent results. Since our plan was to travel back to Italy only one week later, I wouldn't have been able to process my raw frames until then. But I needed to have them processed as soon as possible in order to stand a chance of seeing my pictures published on some popular websites or social media. Fortunately, we had a decent Internet connection in La Serena, so I rushed to send several Gb's worth of data to my friend Lorenzo Comolli, who made the HDR and prominence composites than can be seen below.

During the eclipse I also used a data logger to record some environmental parameters (temperature, humidity and pressure). Since the eclipse was so close to sunset, the late afternoon temperature decrease typical of a clear day prevailed, and the “classic” solar eclipse temperature drop was not observed. 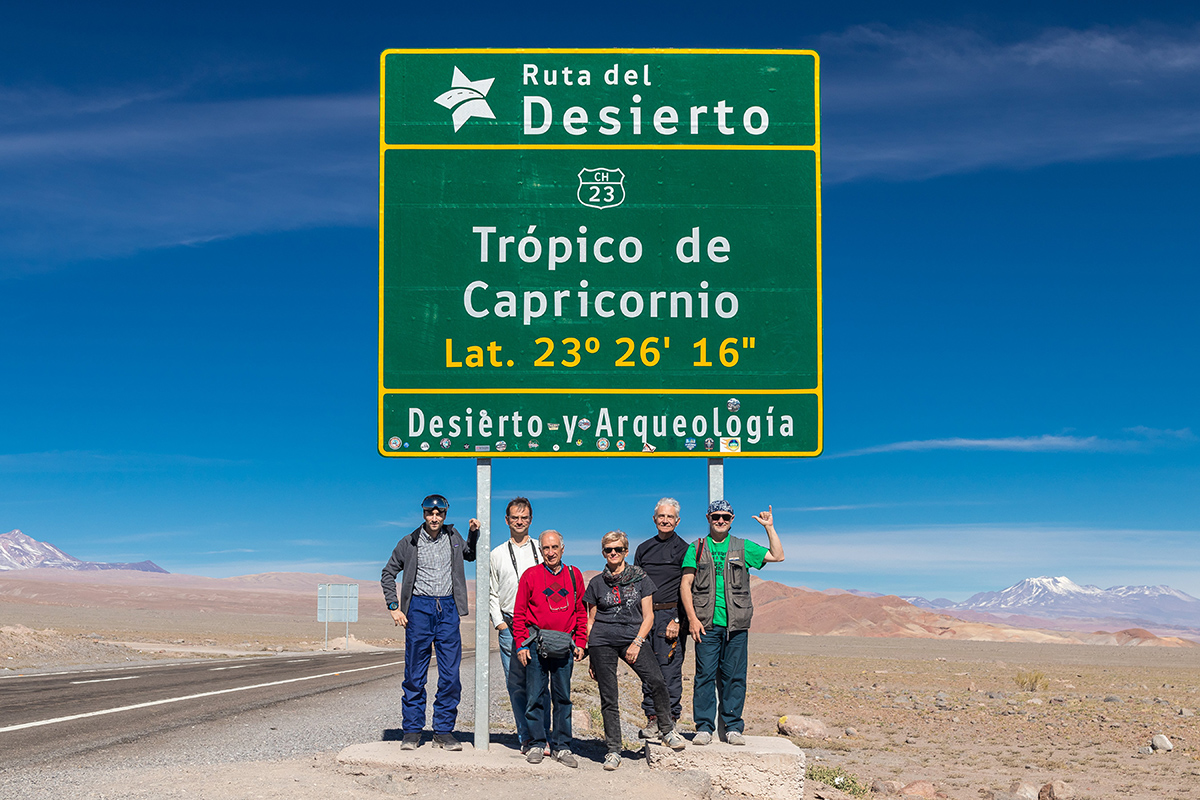 As pointed out in the beginning of the report, this eclipse was very challenging for a number of reasons, therefore I am quite happy with the results. The only glitch was that the longest exposure frames taken with my 6D turned out blurry. I blame it on the support connecting the 6D+telephoto lens to the mount’s counterweight bar being too long and creating a lever which greatly amplifies any kind of vibration, mainly from the shutter. That support will most likely have to be completely redesigned before the next eclipse trip.

To top it all off, our wonderful trip to Chile continued with a visit to Atacama desert, where we also enjoyed a couple nights under the southern sky at high elevation. But that’s a different story, which I’ll perhaps describe in an upcoming article.

Let’s just be happy with my results for the moment. But I’m already looking forward to the next solar eclipse of December 2020, which destiny placed once again in Chile and Argentina, around ten degrees further to the south from this year's one. Anyway, I still have plenty of time for planning.

Until the next adventure!