On June 15th, 2011, our Solar Systems giant clockwork treated us once again to a very beautiful event: a total lunar eclipse. It had been three years since one such eclipse was visible in Northern Italy back in February 2008. In this case, the local circumstances would favor Central Asia and Eastern Europe, while the situation would be worse for Northwestern regions. In particular, over Northern Italy totality would start just a few minutes after moonrise, and anyway the entire phenomenon would take place with the Moon very low above the southeastern horizon (less than 15°) and amid the bright summer twilight. However, this eclipse was very interesting for several good reasons...

The reasons were the following:

For all the above reasons, this eclipse would be one of the longest and darkest possible, and this would make it very challenging to observe and image. Furthermore, the Moons low height above the horizon would add to the challenge. And I do love challenges! :-D 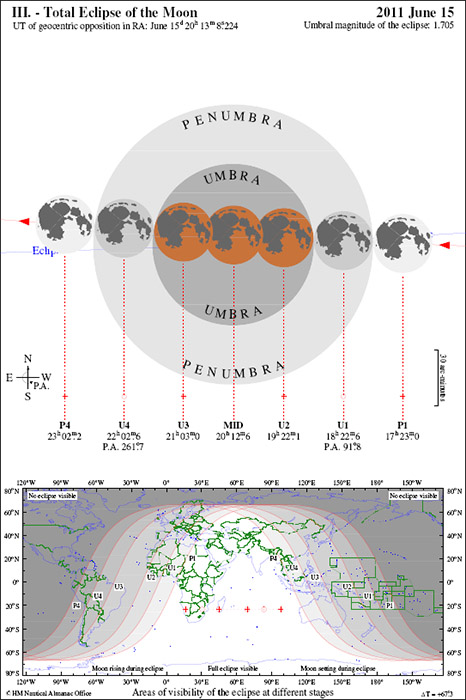 Unfortunately the first half of June 2011 was marked by very unstable weather patterns, with plenty of clouds and rain. The eclipse day started out clear, but by noon already it had almost clouded over, especially in mountainours regions; and plus, a weak cloud front coming from the west was expected to roll in as well. So, the idea was that the farther southeast from the mountains, the higher the chances of seeing the eclipse. All things (weather prospects, personal engagements, etc) taken into account, together with some friends we finally decided to try our luck in the fields near Cogliate (MB, Italy) where one of the local astronomy groups (Circolo Astrofili di Saronno) had organized a public event. Here is the gear I used for imaging:

Unfortunately the sky was party cloudy and hazy, and this prevented us from observing most of the totality phase, which would take place from 21:22 until 23:03 CEST. At first the Moon wasnt visibile at all: not through binoculars, let alone to the naked eye. Later on somebody had the clever idea of finding the Moon by using our telescopes automatic pointing systems: it worked out fine, and within minutes we were able to spot the ecliped Moon with our laser pointers and then with the naked eye. By then most of totality had already gone: yet we managed to observe it for about 20-25 minutes. Later, we watched the entire partiality phase, in spite of the clouds: a while past midnight, just after the end of partiality, it clouded over.

As expected, the eclipsed Moon was amazingly dark. Back in 2008, one 4s exposure @ISO 400 was more than enough to shoot the Moon, whereas now a 15-s exposure at ISO 800 could barely make it stand out from the background. This sure is a remarkable difference in brightness (one order of magnitude, or about 10 times as faint!).

All the pictures were taken by controlling the camera with a laptop, typically at five-minute intervals and with a 11- or 13-stop exposure bracket. This means that each time a burst of 11 or 13 picture was taken, with a factor of two in the exposure time between each picture.

All in all I think I can be quite happy with the final results, which are shown in the next section.

Here is a 13 s exposure to start with, acquired at 20.49 UT (22.49 CEST), i.e. ten minutes before the end of totality: it is clearly underexposed and rather noisy. For better results, I should have acquired and integrated several pictures together, but it just didnt come to mind... :-( 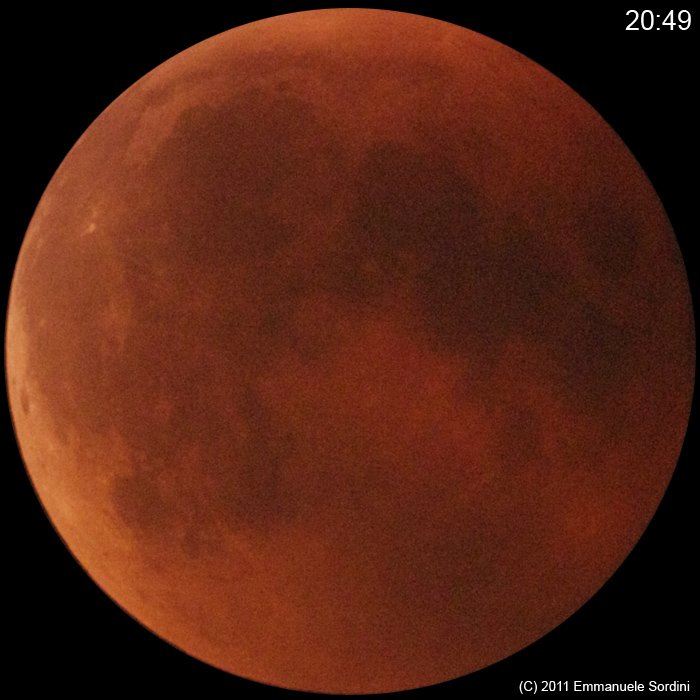 Next is a picture taken at 20:59 UT (22:59 CEST), only three minutes before the end of totality. Here we can notice a sheer increase in brightness: as a result, the picture is much less grainier and shows a greater amount of detail. The left-hand side of the Moons disk is much brighter, since the Moon is slowly coming out of Earths umbra.

During the partial phases, it is not possible to expose correctly the whole of the Moons disk in one single picture, due to the huge difference in brightness between the eclipsed and the non-eclipsed part (more than 1000 times!). If one exposes for the former, the latter with be burned out; conversely, if one tries to capture the latter correctly, the former will become invisible.

The use of a technique called HDR (short for High Dynamic Range) makes it possible to visualize the entire lunar disk as it can be seen through a telescope with the naked eye (which automatically adjusts to the difference in brightness). The picture below is a composite of 10 consecutive frames taken around 21:20 UT (23:20 CEST) with exposure times from 8 s to 1/60 s. Processing done with Photoshop and Photomatix Pro.

Below is a time lapse movie which compresses more than shots (one each 15s) into a 30-s video. Unfortunately I had problems stretching the frames correctly, and there are even some boogers on the camera detector: here one can clearly see the movement and changes of the different cloud banks, which finally covered up the sky. For better experience, it is advisable to view it in full-screen mode (by clicking the four-arrowed button just next to the vimeo logo) and with the sound on.

All in all, I think the results turned out to be better than originally expected. Except for a couple of glitches (pictures of totality clearly underesposed and flaws in the time-lapse frames), I think it wouldn't have been possible to get much more out of this situation.

The next lunar eclipse which is observable from Italy will take place quite a while from now, in September 2015. In the meantime, two solar eclipses will happen in 2012: one in May (western USA) and one in November (Northern Australia). Needless to say, I already have my heart set on observing at least one! :-D