On March 20th, 2015 a solar eclipse took place, with totality visible only from the North Atlantic Ocean and the Arctic Ocean. It would touch land only at two remote northerly locations: the Faroe Islands and the Svalbard Archipelago, stranded amid the Arctic Ocean at about 800 km north of NordKapp (Norway). From the rest of Europe, including Italy, this eclipse would just be visible as partial, with obscuration of the Sun increasing from SE to NW.

Since for several reasons I could not travel all the way to the totality zone, my plan was to observe the partial eclipse from home. However, the day before (March 19th), the weather prospects for my area (province of Varese, Italy) weren’t really good. Therefore, I resolved to get up in the wee hours of eclipse day and make a last-minute decision on my destination.

I got up around 5 am on eclipse day, when the sky was overcast as expected. Based on the latest forecast and weather station reports, I made up my mind about traveling south, i.e. towards Piedmont and Liguria. After a good two-hour drive, I stopped in a village called Rocca Grimalda, located amid the foothills of Monferrato in the province of Alessandria. There I found a nice observing spot with unobstructed view towards the southeast: the sky was clear but very hazy.

After getting to my observing spot, I set up my gear. Unfortunately, I only roughly polar aligned my mount with a compass, since Polaris is not visible in broad daylight. Just a few minutes before the start of the eclipse, my DSLR remote control gave me a low battery warning, and I found that one battery had leaked some acid. Fortunately I managed to fix the problem by cleaning the compartment and changing the battery, but because of this I missed the first few minutes of the event. Fortunately, after fixing the problem I managed to observe (and image) the eclipse without any major glitches, except for some thin clouds. Here are the local circumstances for my site: first contact at 9:22, maximum eclipse at 10:30 (0.704 magnitude, or 63.8% of the solar surface obscured), and last contact (eclipse end) at 10:42.

The eclipse sequence was acquired with a Canon EOS 500D camera set a 100 ISO through a Pentax 105 SDHF refractor (700 mm focal length, f/6.7), Baader Astrosolar filter, riding on an Avalon M-zero mount. I shot every 10 s, yielding a total of more than 800 frames.

I didn’t experience any significant temperature variations during the eclipse (but I didn’t bring a thermometer). What I did notice, however, is a noticeable drop in brightness. As a proof, I kept another camera (a Canon 450D DSLR) always pointing in the same direction, with a mixed field of view (50% sky – 50% landscape), and I noted down the exposure meter readings every 5 minutes. Of course the measurements are not very precise, but I recorded a more than twofold increase in exposure times, as shown in the graph below, where the inverse of the exposure time is plotted so that the minimum of the line falls at maximum eclipse. 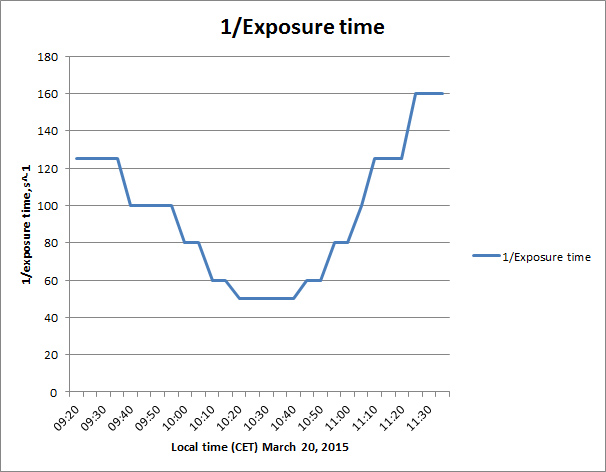 Below you can find some pictures from the eclipse, and a time-lapse movie obtained by composing all the frames into a single movie.

There is something particular about my time-lapse. Because the mount was poorly aligned, I had to re-center the Sun in the field very frequently, resulting in big “jumps” between consecutive images. Unfortunately, for several reasons, none of the popular automatic image stacking applications (Registax, Iris, Autostakkert, and many others) could cut the mustard. Therefore I developed an ad-hoc MATLAB program which provided a fully automated way to align all the 800-plus frame sequence: minor manual adjustments were required for only a handful of frames. I will probably write about that in another article: in the meantime, enjoy my pictures!

The eclipse sequence was acquired with a Canon EOS 500D camera set a 100 ISO through a Pentax 105 SDHF refractor (700 mm focal length, f/6.7), Baader Astrosolar filter, riding on an Avalon M-zero mount. I shot every 10 s, yielding a total of more than 800 frames.