During the last bit of 2013, comet ISON was not the only comet visible Thank God, I'd say, because ISON turned out to be a real dud. Around late November there were four comets visible in the sky at the same time, the brightest of the pack being Comet C/2013 R1 Lovejoy, that went on to put on a really good show.

Discovered on September 7 by Australian amateur astronomer Terry Lovejoy, this comet kept visible during the second half of the night, first zipping through the winter constellations of Monoceros and Cancer between October and November, then moving into Canes Venatici and Bootes between late November and early December, and finally ending up into Hercules during the second half of December.

The peak brightness was reached between late November and early December, when the comet passed closest to Earth at about 0.4 AU and reached at least magnitude 5. Perihelion took place on December 25th, but by then the distance to Earth had increased to 0.8 AU. At the time of writing this (mid-January 2014), the comet is still visible in Ophiucus but has since grown fainter at mag. 7.

Let's face it: thank God we had comet Lovejoy! I admit it served (at least for me, but I bet for many others) as a makeshift for ISONs disappointing flyby. The proof of this is that I imaged comet Lovejoy as many as EIGHT times over almost two months, which would have been too much even for comet Hale-Bopp :-)

My images were acquired with many different combinations of optical tubes and cameras. I think it's better to sum everything up in a table:

The times in the above table are taken as the midpoint of each exposure acquisition interval.

On November 1st (Halloween's Night) comes my first picture of the comet, taken under clear skies in the Apennine range with a full-spectrum Canon 450D + an Astronomik L EOS Clip filter at the prime focus of a 8-inch GSO Ritchey-Chrétien. The comet is shining at a bit more than mag. 7 with a very short tail and a beautiful bluish-green coma. 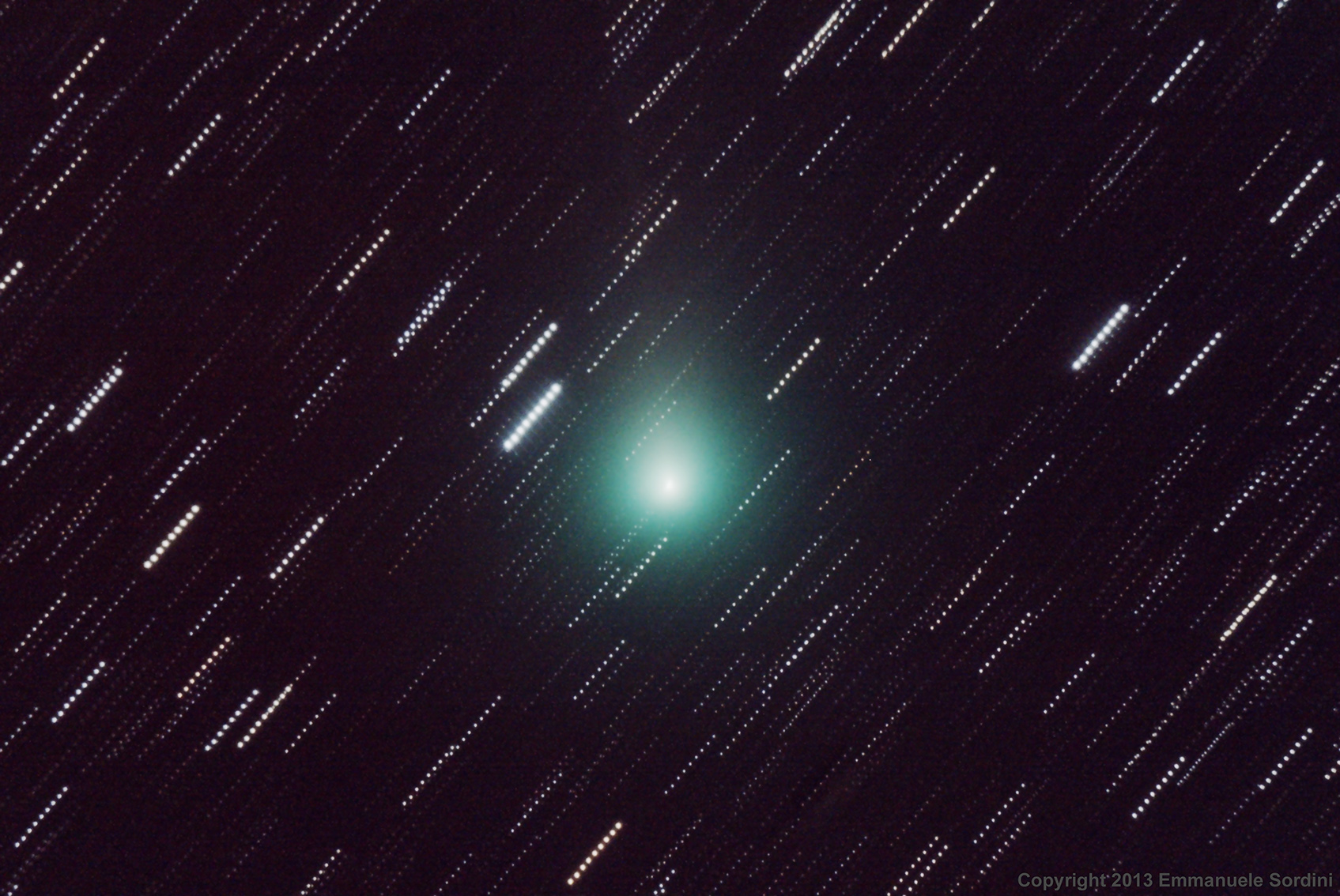 Between November 6th and 8th, a nice rendez-vous with a very popular object, the M44 (Beehive) open cluster takes place. In the morning of November 7th, I manage to shoot the comet when it is located about 1.5 degrees from the cluster: consequently, I have to use a wide-field setup this time. The Pentax 75 + Canon 5D combo, covering a field of about 4.7 x 2.7 degrees, is a perfect match for this application. Too bad the framing was not perfect, but nevertheless I find the outcome pleasing to the eye. 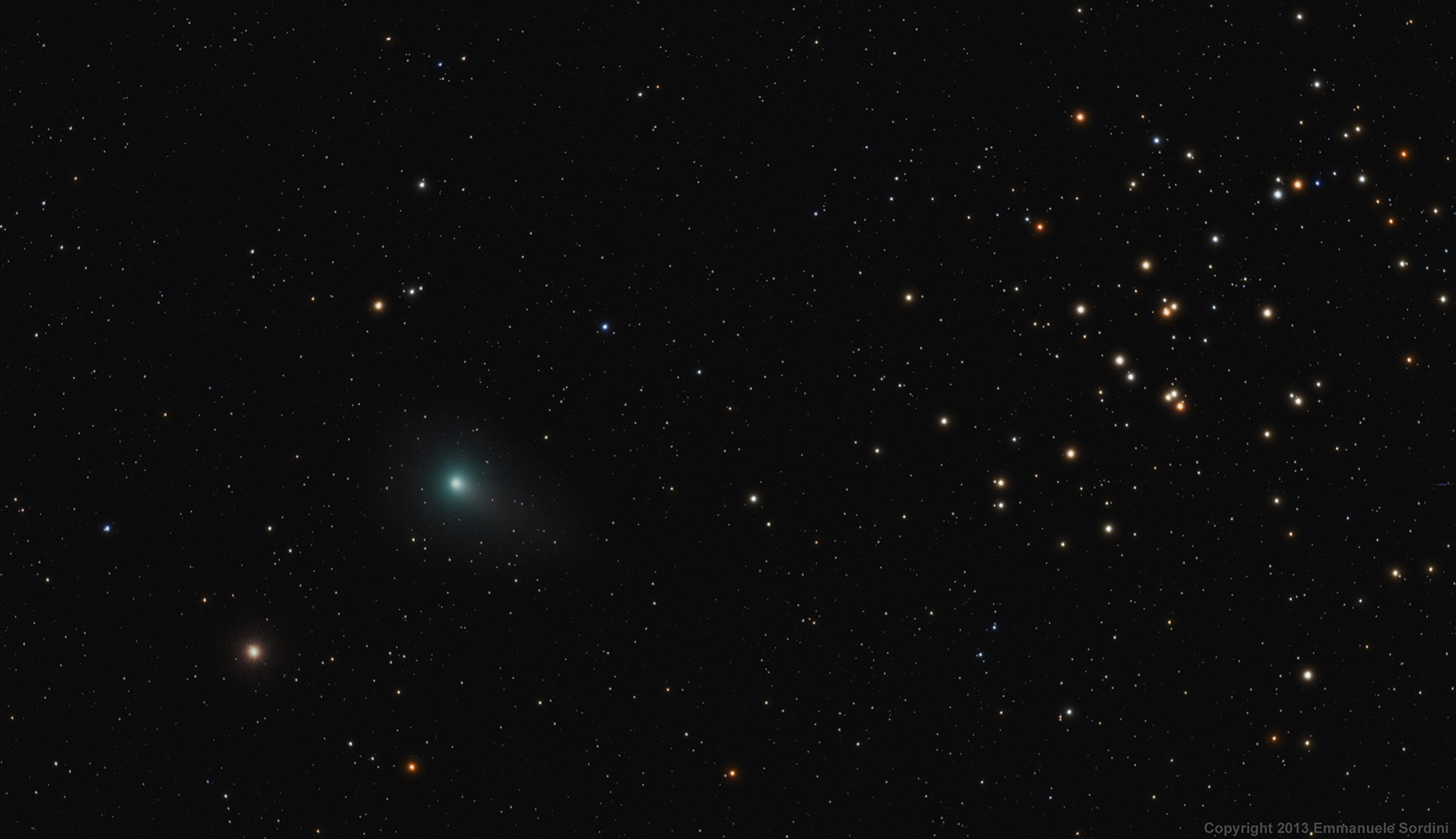 On November 12 I manage to take the third picture, and the second one from my backyard. The comet is now shining at magnitude 6. This picture was taken with my Pentax 75 OTA and the Canon 450D camera. Unfortunately the less than ideal sky conditions created many flaws in the picture, the worst of which is a nasty gradient. This the only image not processed by myself, but by my friend Edoardo Radice, who managed to find a very good tradeoff between processing strength and amount of detail visible. 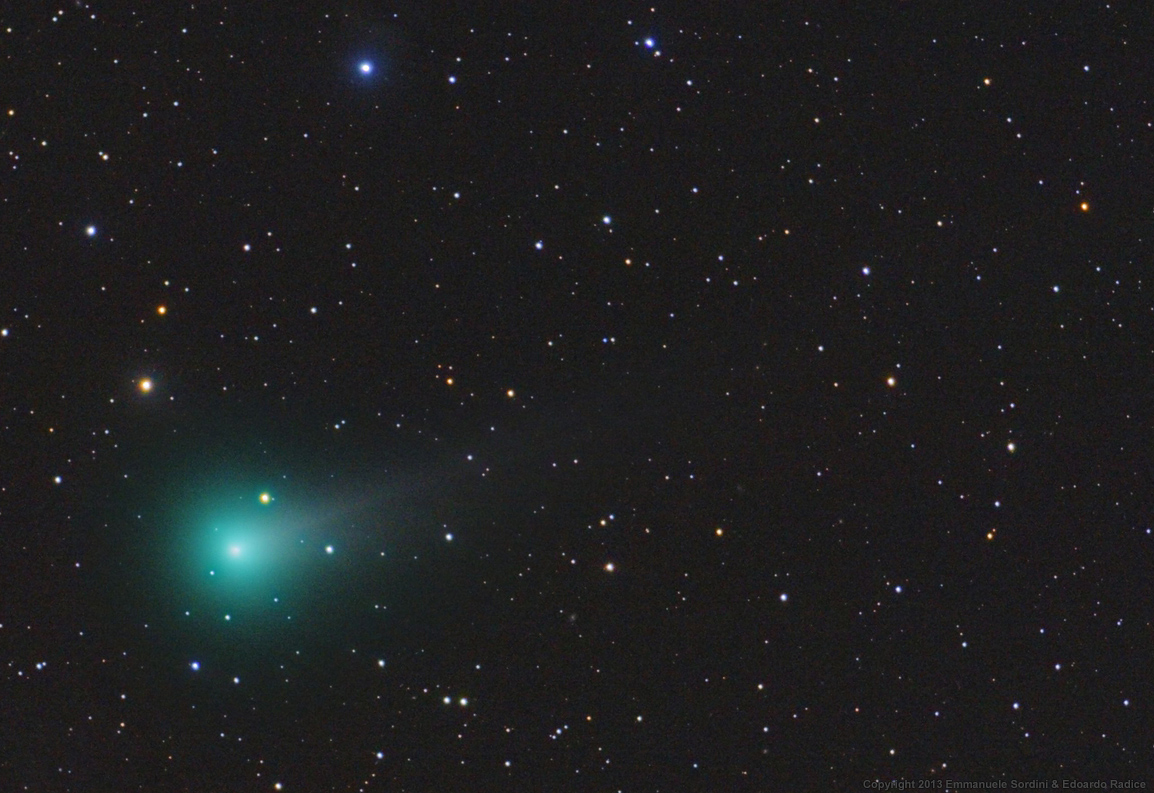 Two more weeks pass by, without any chances to image the comet, because of bad weather and personal engagements. However in late November, with the disappointing adventure of comet ISON quickly coming to an end, a rather long spell of good weather starts, during which I will be able to image the comet several times. On November 28th I once again photograph comet Lovejoy from my backyard, but with a narrow-field setup this time (8-inch RC + Canon 500D DSLR). The comet is currently closest to the Earth and brightest, at about magnitude 5. 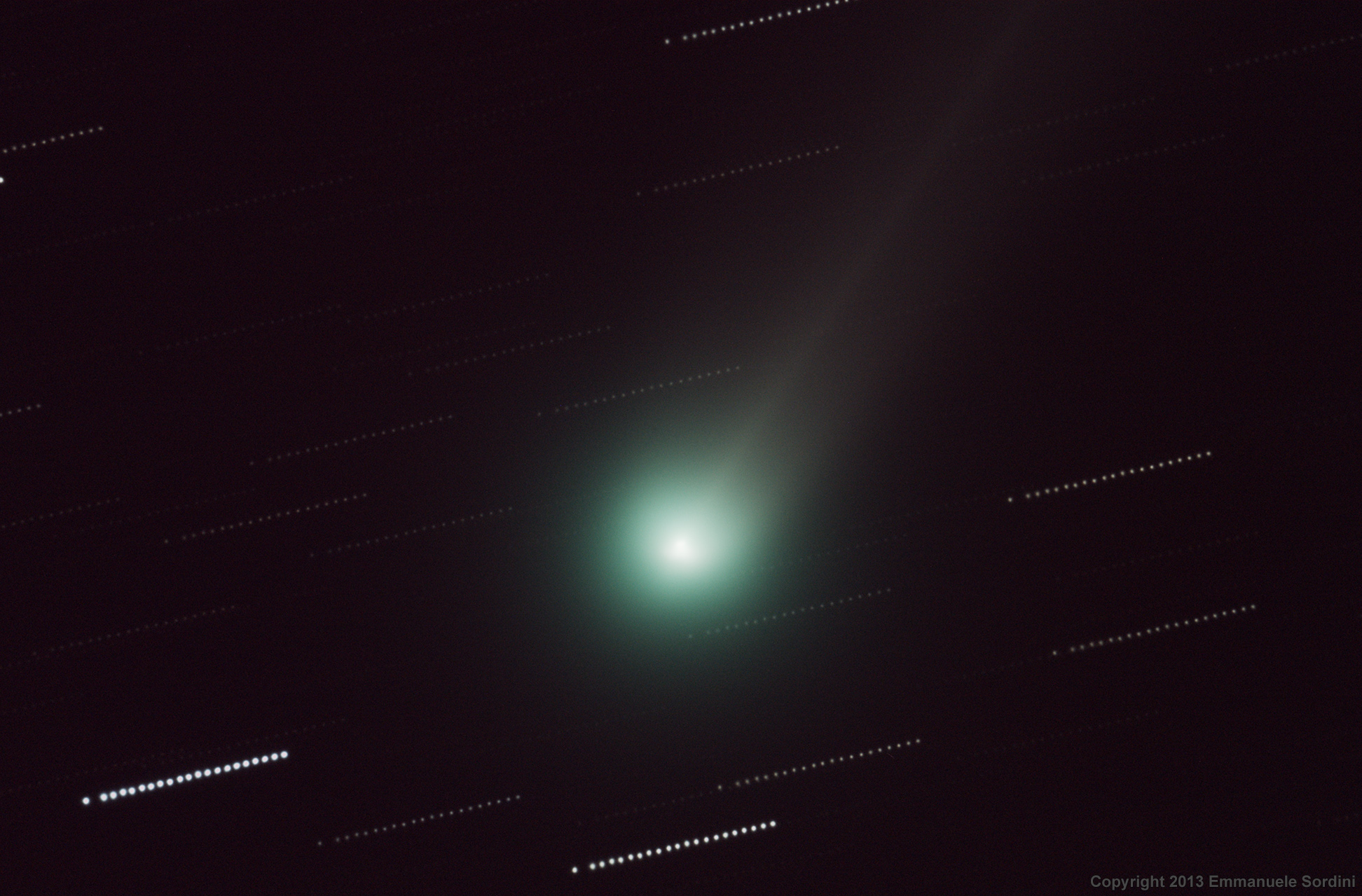 Owing to the 1600-mm focal length of my RC OTA, the comets false nucleus shows some jets coming out, which become really evident after running the above picture through the Larson-Sekanina algorithm: 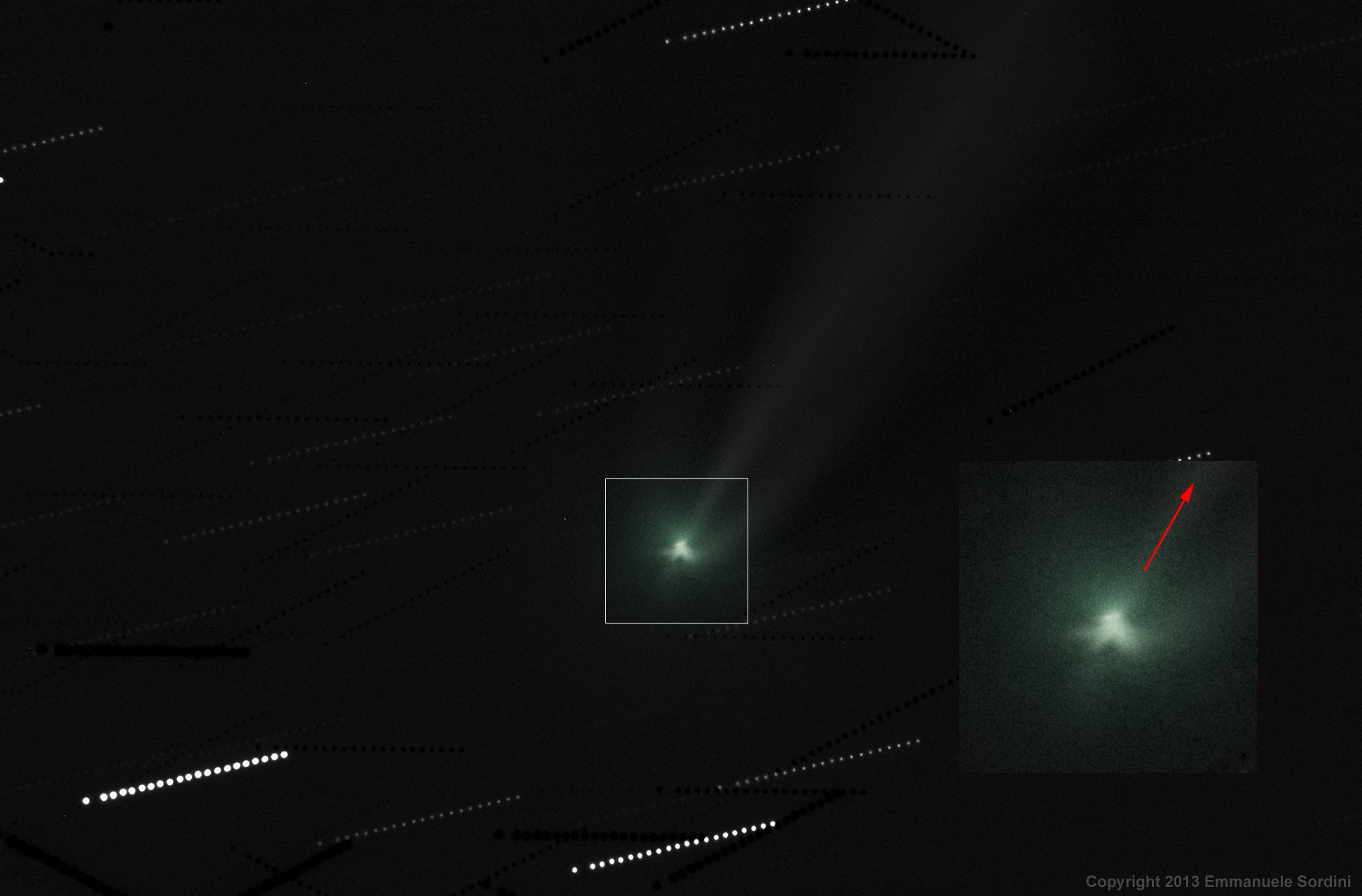 The inset shows a close-up of the jets; the red arrow is pointing in the direction of the comets tail.

On December 4th I image comet Lovejoy from my backyard for the fourth time in a row using once again my Pentax 75, but this time with my good ol' ST10-XME CCD camera plus a L filter. I must say that CCDs really do have an edge over DSLRs when it comes to capturing the faint structures in the comets tail. 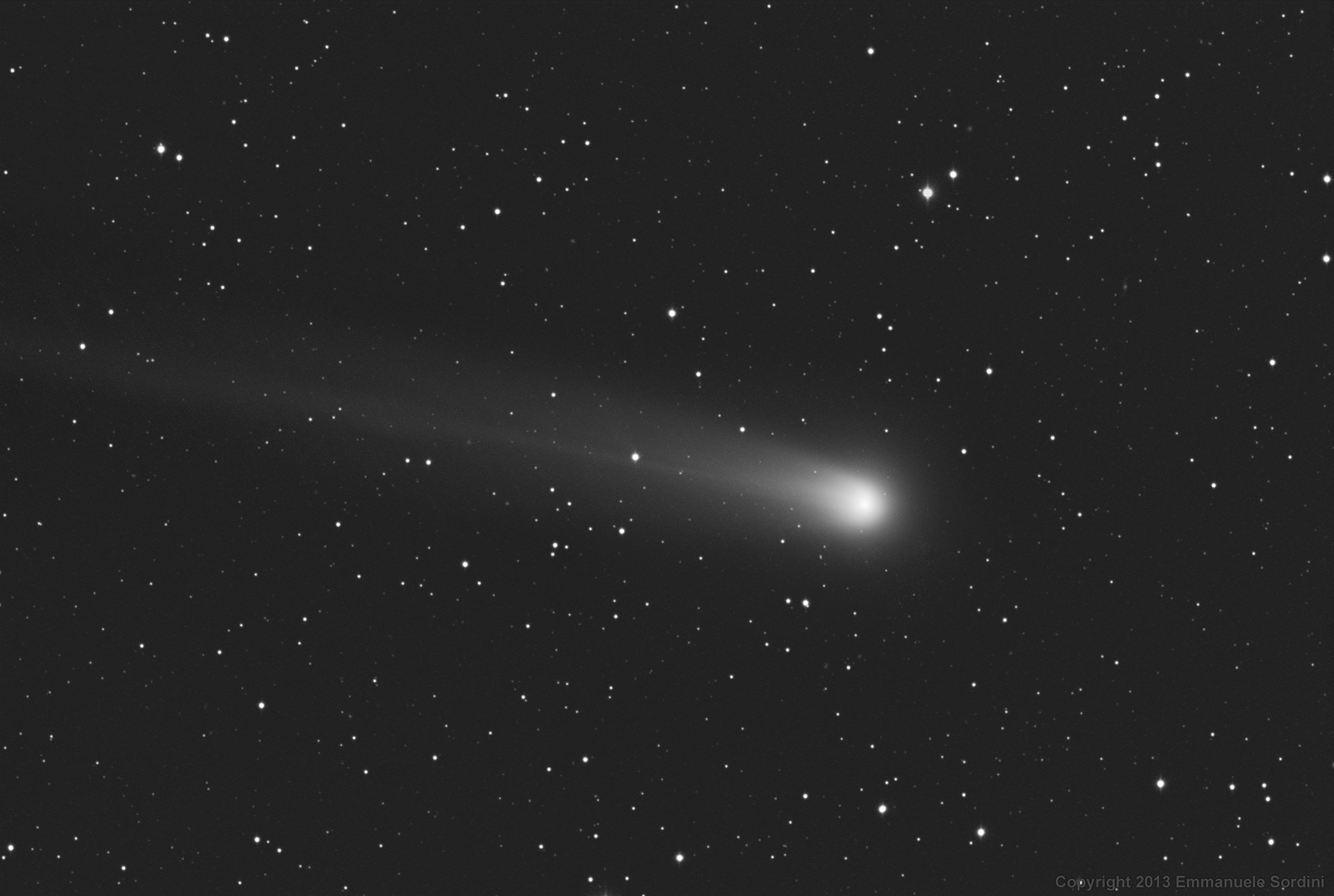 Some ten days later, it is once again time for a new moon observing trip out in the field under clear skies in the Apennines. After a whole night of deep-sky imaging, in the wee hours I point my scope at comet Lovejoy. Thanks to the low light pollution, the comets tail is much easier to detect: the picture below shows a tail spanning more than 3 degs in length, but we know that it is at least twice as long in wide-field pictures. The comets brightness is now starting its downward path, but it is still a fine object shining at the limit of naked-eye visibility.

Around mid-December I image the comet with my Pentax 75 and my ST10 CCD camera. This time the comet shows off some nice features in its tail, which are more evident than in the picture I took in early December. The comet has grown noticeably fainter by now, reaching the 6th magnitude. 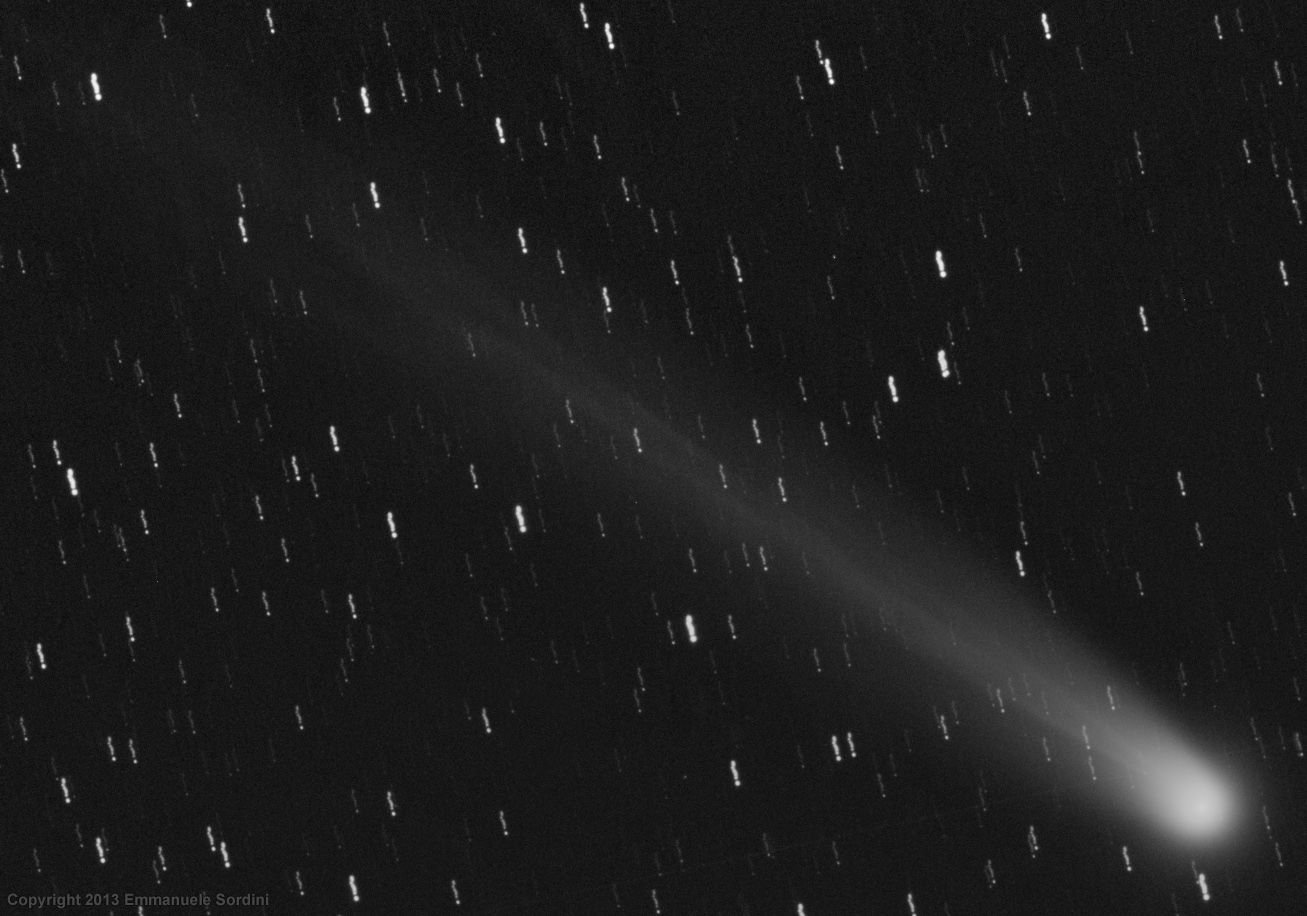 After the Christmas binge :-), it is time for 2013's last new moon observing trip under clear skies. Unfortunately this outing was ruined by high cirrus cloud, which caused halos around the brightest stars. In processing this image I had to fight with all kinds of defects and gradients: therefore, in spite of my rather poor result, I dont think it would have been possible to do much better with those weather conditions.

BTW, this is also my last picture of comet Lovejoy.

Even if it did not brighten up to Ikeya-Seki or McNaught levels, I think that comet C/2013 R1 Lovejoy was really a pleasant surprise. Not because it served as an "ISON replacement", but because it turned out to be brighter than expected and it offered some interesting imaging opportunities. Moreover, it also posed some very interesting image processing challenges, especially for newbies like myself. For example, I had to deal with gradients and I also tried to process some pictures in order to remove star trailing, and I think that in the end I kind of managed to get some fairly decent results.

So long comet Lovejoy, it was a great pleasure to meet you!