In October 2010 the periodic comet 103/P Hartley 2 put up a nice show during its most favorable comeback since its discovery back in the mid 1980s, passing at around 0.1 AU from the Earth.

103/P is a comet discovered back in 1986. It is periodical with a period of around 6.5 years: this means it will be coming back into the inner Solar System at regular time intervals.

The apparition of 2010 was by far the best since its discovery: it would be visible rather high above the horizon from northern hemisphere locations almost all night long, and whats more important, a close encounter with Earth was expected to take place on October 20, 2010, when the comet would pass at only 0.12 AU, or a bit less than 18 million km from us.

These very favorable conditions would make comet Hartley 2 a naked-eye object (under dark skies), and would also offer a terrific opportunity for a rendez-vous with a spacecraft. On November 6, 2010, the EPOXI mission (extension of the Deep Impact mission that explored Comet Tempel 1) successfully "grazed" comet Hartley/2: click here for the full report on the NASA website.

Now let's go back to the main purpose of an astrophotographer: shooting the comet!

Visual observations since the summer of 2010 were rather disappointing because the comet proved to be a bit dimmer than originally predicted. Nevertheless, it would offer a good opportunity to image a moderately bright comet which was expected to zip by a handful of deep-sky objects. More generally, imaging the comet in the days of closest approach (around October 20th) would be very challenging because of the presence of the Full Moon high up in the sky from the 16th or 17th, so that any attempt would have to be made before that date. The most interesting opportunity was the close encounter with the Double Cluster of Perseus (NGC 869-884) on a three-day imaging window from October 7th to 9th during a new Moon period.

Very unfortunately, my new moon weekend got ruined by the weather, and so did my plans of shooting the comet passing near the Double Cluster. The only chance left of taking pictures before everything would get engulfed in bright moonlight was sometime during the week of October 11th. Unfortunately I could not take any time off work, so I had to make do with taking pictures from my backyard which is located in a suburban area (best SQM-L readings around 20 mag/arcsec^2). Fortunately enough, on October 12th and 13th I enjoyed two clear nights, albeit with poor transparency conditions.

Being so close to the Earth, the comet was zipping quite fast through the sky, at about 7-8 arcsec/min. I was using my ST10-XME CCD attached to my 800-mm-FL Vixen 103 ED refractor, which gives a scale of 1.75 arcsec/pixel: this meant that barely 15 s of exposure would already be enough to get a one-pixel blur. In practice, I found that 90 s was the longest exposure that still allowed to keep motion blur at acceptable levels. Below are a few shots of the comet. 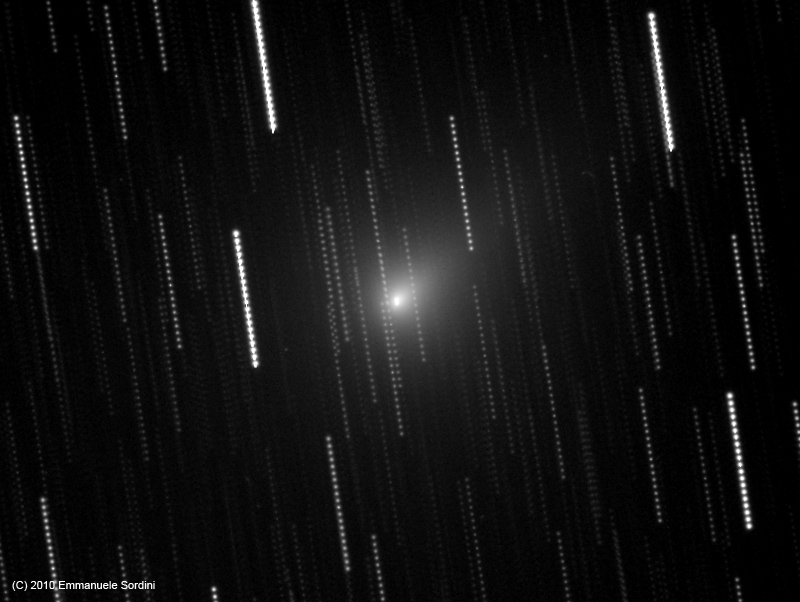 A dart in the sky?

Comet Hartley 2 is not the fastest comet ever, but I'm sure it would stack up pretty well against other competitors: you could easily see it move with respect to the background stars between two consecutive exposures, or just 2 minutes apart.

To give a better idea of its speed, I took all the 72 exposures made on October 12th and put them together into one single movie: each exposure is labeled with its actual acquisition time. All pictures were just cropped and not resized: therefore the comets displacement in the sky is shown in actual camera pixels. A quick calculation shows that the comet traveled around 14 arcmin in 128 minutes, which yields a speed of about 6.5 arcmin/min.

Movie: Comet Hartley 2 zipping through the sky. Since its in HQ, it can be best viewed in full-screen mode.

In theory, Comet Hartley 2 at its brightness peak (around mag. 5, which occurred about a week after the above picture was taken) was a rather easy naked-eye target. However, it had been reported that its coma was rather large making it rather difficult to make out except under very dark skies: let's verify that ourselves by trying to measure the size of its coma.

First we have to push the processing a bit so as to make the coma stand out: this can be done by playing around with the DDP feature of Maxim DL. Heavy processing will reveal some defects (in this case, a drop in the background brightness on the top-right corner of the picture), but we can live with that. Here is the result:

DDP-enhanced version of the above picture which brings out the faintest details of the coma (and some gradient): normal color version 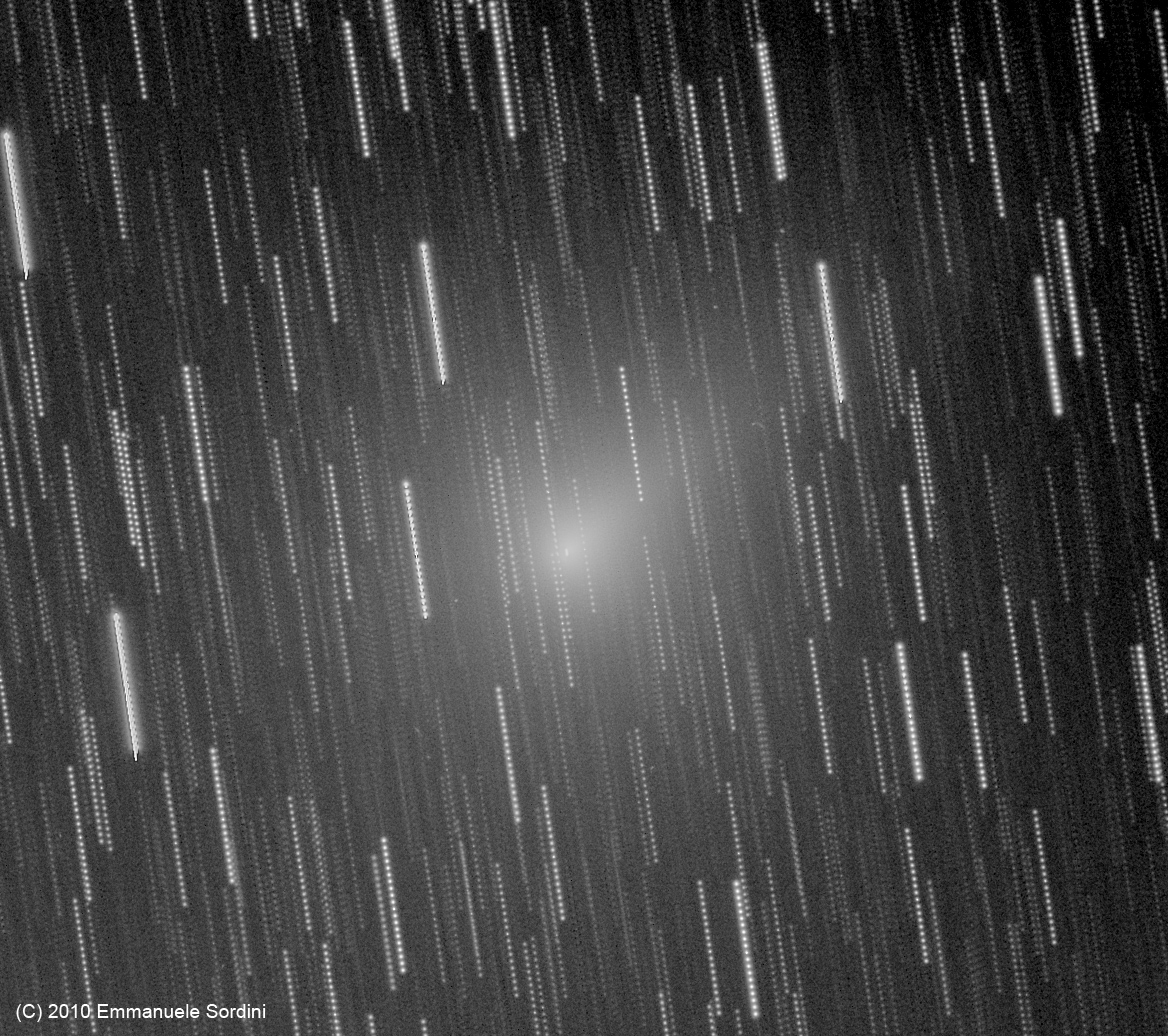 and with a false color palette which shows the different brightness levels and the oval shape of the coma: 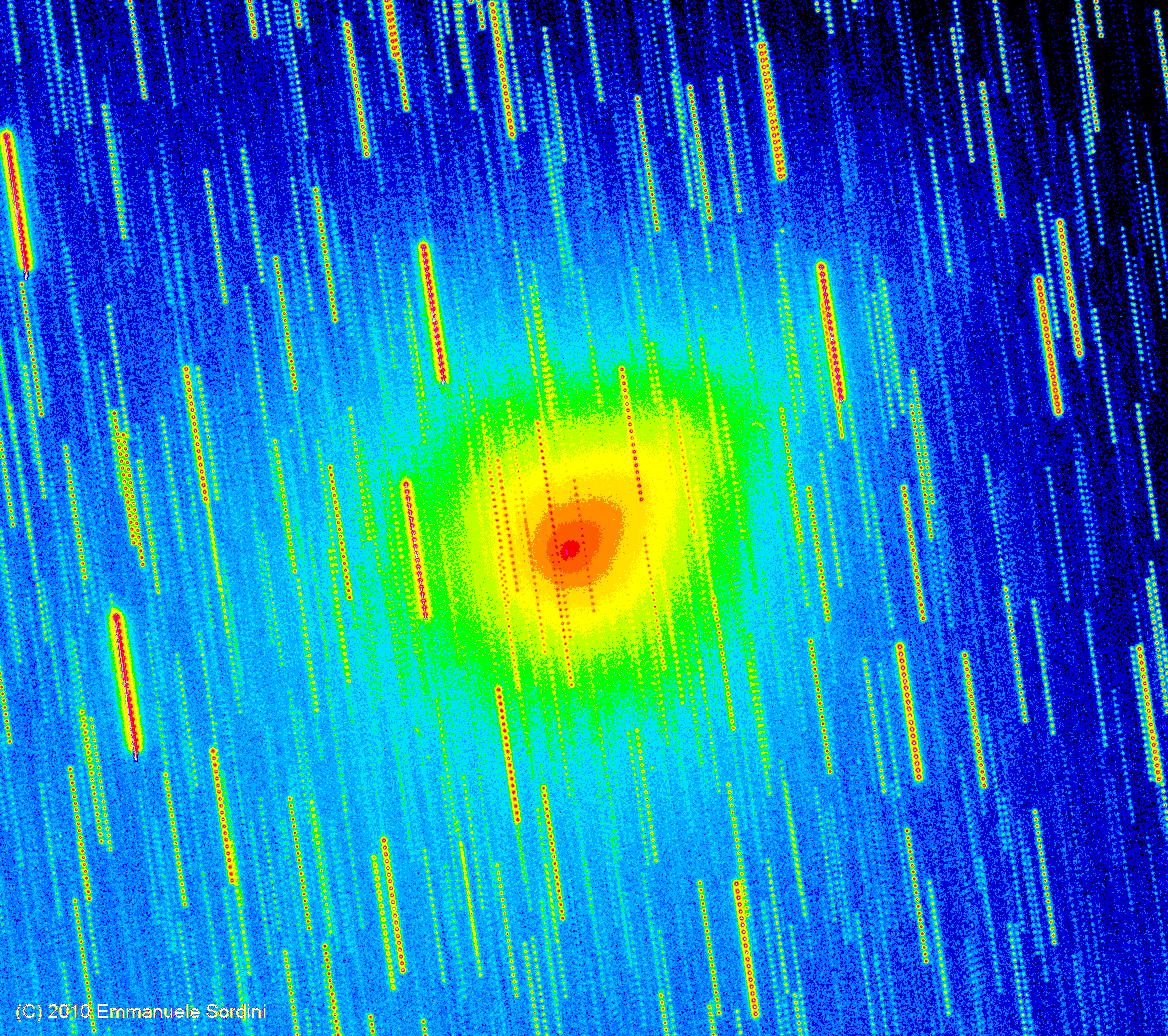 By using Photoshops measure tool on the enhanced picture of the comet we get about 30' x 25' for the coma, which is a considerable size for a comet this bright. Higher estimates have been reported by observers under darker skies.

In spite of the uncooperative weather I think I managed to pull off some shots of this comet that IMHO are worth sharing; this also shows that something decent is still within reach even with rather heavy light pollution. The only regret I have is not having managed to shoot the comets close encounter with the Double Cluster.