Looking back at comet ISON

Discovered in September 2012 by two Russian Astronomers (Vitali Nevski and Artyom Novichonok) with the 40-cm reflector of the International Scientific Optical Network (ISON) at the Observatory of Kislovodsk (Russia), this comet soon catches the attention of the scientific community, because its perihelion is expected very close to the scorching solar surface at 0.012 AU, i.e. less than 2 million km.

From the comet's path and brightness curve in the months following its discovery, some people suggest that it might get very bright around perihelion (mag. -6 to -10), thus becoming visible even in daylight.

These predictions give rise to high expectations with strong resonance in the media, so that ISON the Comet of the Century by some people. However, as time passes by the picture gets quite different, and in early 2013 the brightness increase slows down and the most optimistic peak estimates are corrected to much lower magnitudes (around 0).

After the summer of 2013 comet ISON emerges back from solar conjunction while headed for perihelion, which is expected on November 28th. It is still a quite dim object (around magnitude 12) with a small coma and just a hint of a tail. Its low activity suggests that this comet might be coming from far out in the Oort cloud, probably passing through the inner Solar System for the first time ever.

In October and November 2013 a long spell of bad weather makes it impossible to image the comet; moreover, it is becoming lower and lower in the southeast, where the view from my backyard is almost completely obstructed by my own house. Nevertheless, I manage to pull off a CCD shot for the first time on October 18. Its brightness has increased around mag. 12 by now, with a hint of a tail. Unfortunately in the post-processing phase I realize I bungled up my imaging session because the exposures were taken through the G filter instead of the clear (L) one, which yielded a much darker image.

Comet ISON on October 18, 2013. This picture was acquired through a G filter, thus yielding a much dimmer comet. The raw frames were properly calibrated, but the image was stretched so heavily in order to bring out the comet that some image defects also became visible. 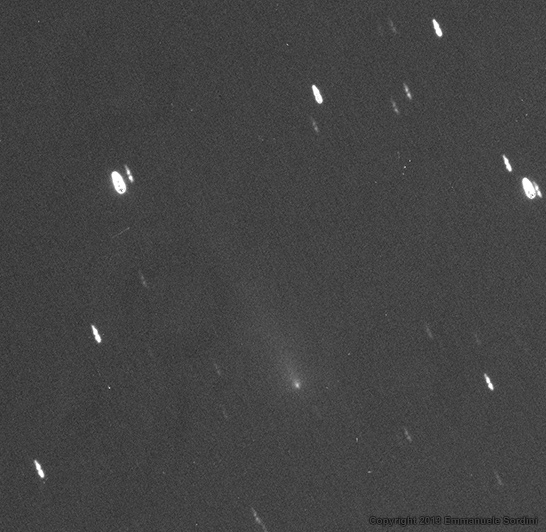 During the second half of October I can't manage to catch any more glimpses of the comet, both because of bad weather and personal engagements: anyway, I continue to keep posted on the latest developments. A break in the clouds between two low pressure systems on the night of October 31st -November 1st allows me to go on an observing session on the Apennines, during which I manage to image the comet, which has grown brighter at mag. 9. Now it sports a coma about 1.5 wide and a tail 20 long (as measured on my image), which is not observable visually through a telescope.

Comet ISON on November 1, 2013. Please click on the image for a larger version with exposure details. 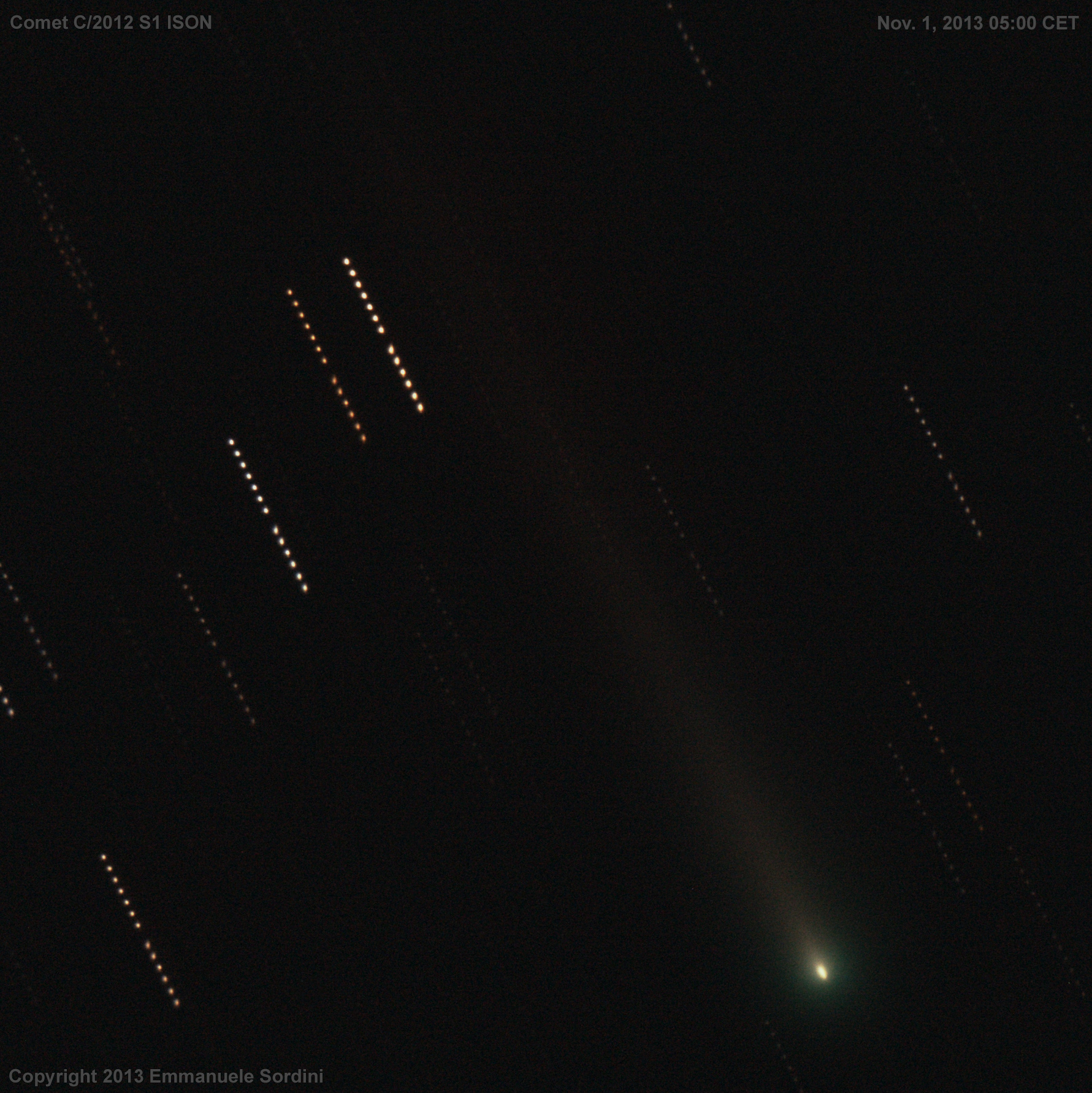 During the month of November I don't manage to observe or shoot the comet, which is getting brighter but also closer to the Sun and lower on the eastern horizon, so that it can no longer be imaged from my backyard; anyway I'm always keeping up-to-date (almost) in real time. On November 13/14 an outburst is reported, and Comet ISON jumps up from magnitude 7 to 5 within just a couple of days, with the tail showing numerous features and details. However, after November 22 the comet plunges into the morning twilight, thus becoming invisible to the naked eye; in exchange for that, at some point it becomes visible in the field of the solar observing spacecrafts such as SOHO.

Finally, on November 28th the show enters its final stage, with the comet just a few hours from perihelion. The astronomer community (including myself :- D ) is anxiously monitoring the course of events, with the comet initially growing so brighter that it causes some blooming in the CCD camera of the SOHO spacecraft. Unfortunately, just before perihelion it seems to fade somewhat, and by the time it emerges back from SOHO's Sun occulting disk, it has turned into a faint debris cloud which gradually dissolves as it drifts away from the Sun. Unfortunately in the coming days all attempts of spotting the comet will fail, and the conclusion is that the comet did not survive its close flyby around the Sun. :-(

What a pity: it was a chance for a comet to put on a nice show, and instead it literally vanished into thin air. Our fellow observers living in the southern hemisphere were treated to two wonderful comets within a few years: comet McNaught (that reached magnitude -6) and more recently comet Lovejoy (C/2011 W3) which brightened up to mag. -1. Lets hope for more luck in the near future!