The biggest surprises always turn up when you least expect them. We Northern Hemisphere dwellers had not seen a decent comet in more than twenty years. When it was discovered in late March 2020, nobody imagined that Comet C/2020 F3 NEOWISE would put on such an impressive show, after a number of “duds”. Anyway, it happened and I’m really glad I got a chance to witness it both visually and photographically.

After reaching perihelion on July 3, the comet showed an unusual level of activity, brightening up to magnitude 1 or even 0. When it got so bright, it was also too close to the Sun to be observable. However, after perihelion it became visible in the morning before dawn. Unfortunately the observing conditions were far from ideal, because the comet was very low above the horizon (less than 10°) in the NNE around 3 to 4 am for observers located at mid-northern latitudes (around 45°).

The first time I set out to observe the comet was on 7th July. Being extremely low in the sky, I had to carefully plan my observation by finding a suitable spot with an unobstructed view down to the horizon. To this end, I resorted to the PeakFinder website, where one can simulate the horizon for any spot on Earth. This website had already come in handy during my 2019 solar eclipse trip. So I found my optimal observing spot to be Piazzale Pogliaghi on Sacro Monte di Varese, at about 800 m elevation. I got there around 3 am: the sky was very clear but with strong wind gusting at 50/60 kph. The comet was located in constellation Auriga, south of Capella: I saw it rise behind a mountain in the distance. Actually, I first saw its tail rise first, and then the whole of the comet: an amazing view! A pair of 7x50 binoculars offered a breath-taking view, with the comet shining at around mag. 2 and sporting a bright dust tail at least 7° in length. I managed to image the comet with a Canon 760D DSLR and a Canon 100-400 L IS II zoom lens on a fixed tripod, which allowed me exposure times of only a few seconds. BTW, over 90% of the frames turned out to be useless because of the sheer wind. In spite of the difficult observing condition, I pulled off my first pic of the comet:

Because of personal engagements, uncooperative weather and even laziness, a few days pass by. In the wee hours of Sunday 12th July another observing opportunity presented itself. In spite of the unfavorable weather forecast, the night was transparent and clear, with the last quarter Moon slightly disturbing the view. Together with a friend of mine, I drove up to a nearby mountain (Campo dei Fiori) at 1200 m elevation,at a panoramic viewpoint offering a clear 180° view towards the north. When we got there, the comet was already up in the sky. In spite of the Moon washing out the view, the comet was clearly visible with the unaided eye. This time around, I brought a sky tracker along, which allowed for longer exposure times. Below is my best shot from that night:

I even had time for a comet selfie! 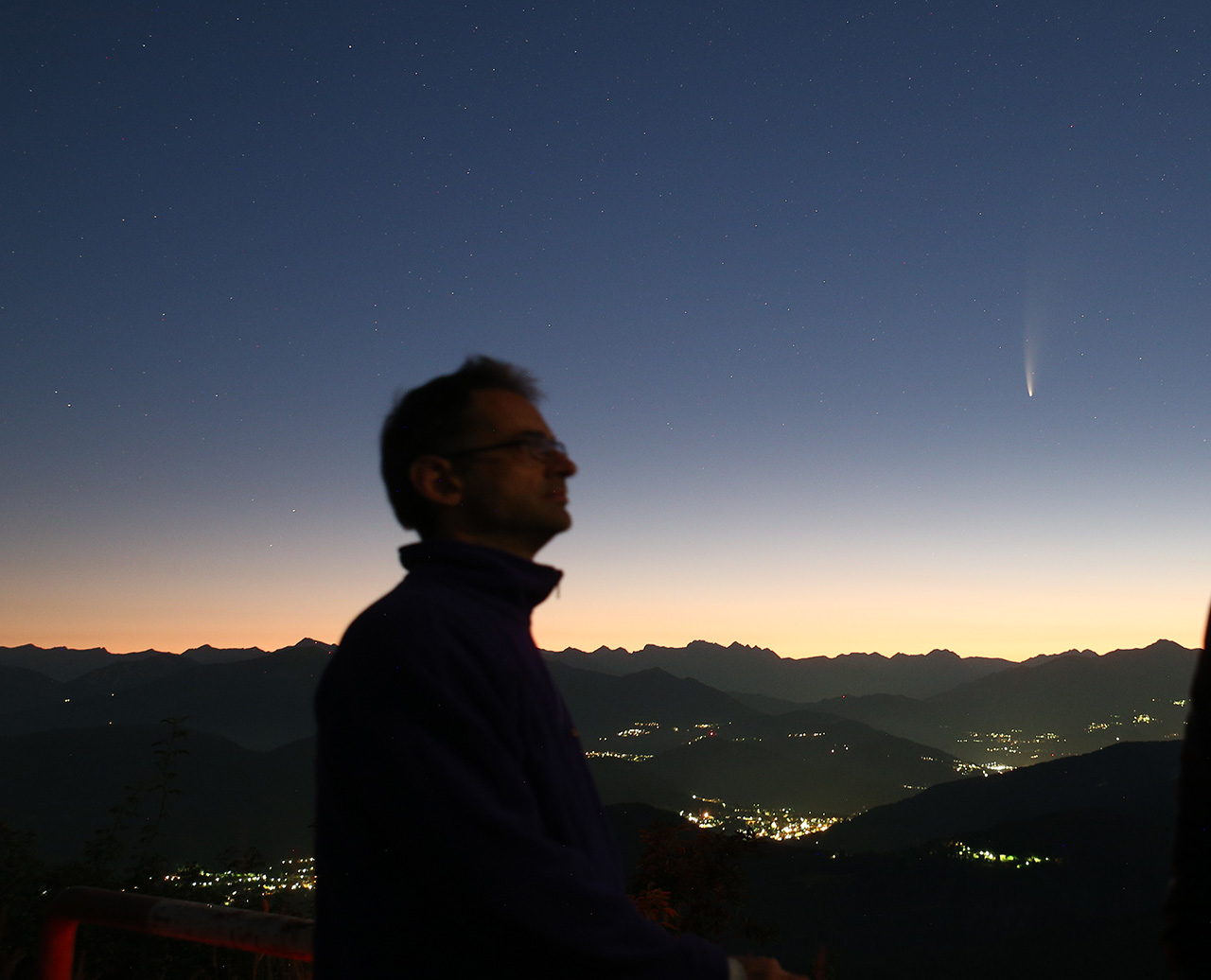 The weekend of 17th and 18th July was the closest to New Moon, which meant the “usual” deep-sky observing trip with a bunch of fellow amateurs. This time around, we drove even farther away to “Passo del Giovà” at 1400 m elevation in the Apennines. I spent two nights there, 18-19 and 19-20 July. Shining at magnitude 3, the comet had clearly faded out by then, but the show was not at all over! It had traveled further north-east, moving into the Big Dipper and thus becoming an early evening object. Not only that: the dust tail was more than 10° long and a wispy, long blue ion tail stood out in long-exposure frames. The view was partially ruined by cirrus clouds in the distance on the first night, but the following evening I was treated to the best conditions up until then. I took both wide-field shots of the comet with my Canon 6D DSLR and a 135 mm Samyang tele lens, and narrow-field shots at the prime focus of my 130/900 mm refractor:

Widefield shots turned out to be a processing challenge due to multiple gradients from both twilight and light pollution. Below is the narrow-field prime focus pic, where the stars were intentionally removed:

For sure, comet C/2020 F3 was a far cry from comet Hale-Bopp or Hyakutake of the late ‘90s, let alone Lovejoy or McNaught that had Southern Hemisphere dwellers in awe with their dazzling brightness. Yet, comet NEOWISE put up a very nice and unexpected show. Astronomers say that it plunged in the depths of universe, only to make a comeback (maybe) in about 6700 years. So, NEOWISE’s show was really unique in that it will be about the same amount of time since the very first human civilizations before it visits the Solar System again. And who knows if mankind as we know will still be there by then...

...but, of course, that’s another story.