This was the first time I ever watched an annular eclipse, after the total one back in 1999. I already knew, but I can now confirm, that annular eclipses are generally less spectacular than total ones, especially in cases where the Moon is known to be significantly smaller than the Sun (the so-called magnitude of the eclipse). Anyway, it’s a wonderful natural event which the serious amateur astronomer should never miss, at least once in a lifetime. Moreover, if one has to “win” his or her eclipse after a long drive and with a little suspense from the weather, well… I must admit it was really worthwhile. But now, sit back and read on to know more about this adventure!

Preparing for the eclipse

The eclipse “totality” area raced throughout Spain all the way from the northwestern coast (near Santiago de Compostela) to the Mediterranean coast south of Valencia; after diving into the sea, it would touch ground again in Northern Africa. Due to the good tradeoff between accessibility and weather statistics, I had decided to go about 100 km south of Valencia near the peninsula of Cabo de la Nao, very close to the central line. However, I had not set the exact spot where to set up for eclipse imaging and observation: once arrived there I would then have decided where to stay. Here’s a map of the area (courtesy Jay Anderson):

After spreading the word of an eclipse expedition among many friends of mine, I resolved to go to Spain by car with a good friend of mine, Marco Scardia, who is astronomer with the Observatory of Merate, Italy. Marco and I would then have joined a handful of heroic eclipse chasers (Lorenzo Comolli, Alessandro Gambaro and Alberto Gianni), who had decided to get there by plane.

Around the 25th of september, we started keeping a very careful eye on the weather forecast, which was very bad for Italy and good for most of Spain, except for – guess where? – the southeastern part of the country. But I was determined to watch this eclipse at all costs, including driving further to the west toward Madrid.

We arrived in Denia in the evening of sunday, october 2nd. Meanwhile, Lorenzo and his friends had already found the exact spot for eclipse observation on a hill overhanging the cliffs just near Benitachell (coordinates: lat. 38° 43′ 09″.7 N, long. 00° 09′ 34″.0 E, elevation 480 m slm, less than one km from the central line). We met at a local restaurant to discuss the final details, and we agreed to meet at the observing site very early next morning. That night, the weather was good, with clear skies and cool temperature.

Just imagine our disappointment when the early hours of monday, october 3rd, greet us with an almost completely overcast sky: a bank of clouds is just overhead and it doesn’t look like it will go away very soon. Here’s what weather looked like for Europe at 7.00 CEST (5.00 UT) on monday, october 3rd: 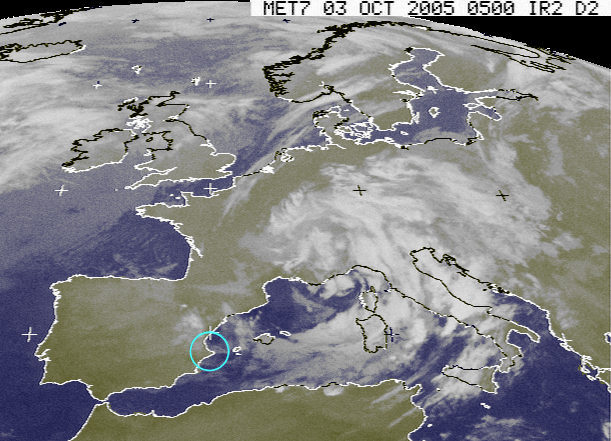 Italy is clearly covered by a very active low pressure area: except for a few people living in the southern part of the country, all other regions will be clouded out. On the contrary, Spain is almost completely clear, apart from some clouds in our neighborhood (the area enclosed by the cyan circle).

I don’t have an Internet connection at hand to check out the weather in real time, but I am seriously thinking about driving to the west in search of a break in the clouds. Then the lack of time and Marco’s indestructible confidence prevent me from running away. Therefore, we arrive at the observing site around 7.45am: our observing mates have been already there for a few minutes. I start assembling my gear while wholeheartedly hoping for the clouds to vanish as soon as possible.

While we are setting up our equipment, the cloud blanket starts breaking, and this gets our hopes up of seeing the eclipse. Every now and then, some breaks in the clouds let us have a glimpse at patches of a blue sky. Here is the Sun peeping through the clouds low above the sea in the eastern horizon at about 8.30 am CEST:

The sight is undoubledly breathtaking, but the prospect of missing the eclipse is not! Anyway, preparation goes on, while the sky is clearing to the southwest. The air is cool (about 14 °C), and a bracing wind is sweeping the hilltops… 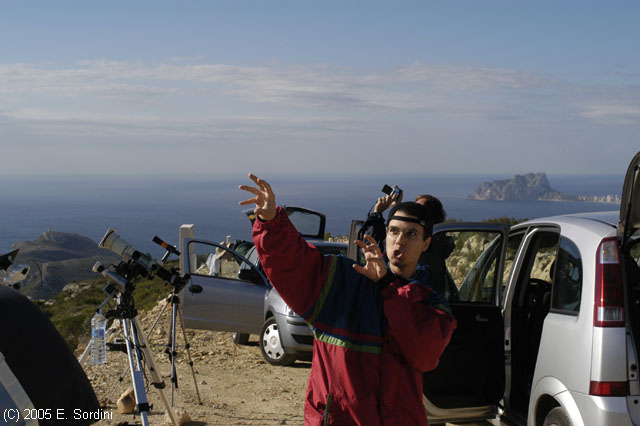 Around 9.15 am, or roughly twenty minutes before first contact (expected at 9.42 am CEST), the southern horizon has cleared, but towards east and northeast a thick bank of cumulus is still there, through which the Sun seldom manages to poke light holes with its feeble rays. The border of this cloud bank is approximately hanging overhead, while areas lying only a few kilometers to the south (such as Cabo de la Nao) are enjoying an almost completely clear sky and are being flooded with early morning sunlight. In the meantime, our observing site has become quite crowded with many eclipse observers (at least 20 people from all over Europe). For a while, we seriously consider throwing out telescopes into the car and rushing away to the south: we soon give up our plans because there is a serious risk of finding no other convenient sites, getting lost, or (even worse) being chased by the clouds.

Much to our disappointment, the first contact takes place behind the clouds, that prevent us from viewing the first twenty minutes of the phenomenon; only a few gaps in the cumulus bank allow us to spot a clearly visible dent in the solar disk. Later on, an unexpected miracle occurs: those pesky clouds clear the field for our sights and telescopes. Needless to say, a photographic spree springs out!

As far as I am concerned, here’s my setup. An MTO telephoto lens (1000 mm f/10) with a Canon EOS 300D camera rides on a Vixen GP equatorial mount and is used for narrow field photography. A Nikon F3 camera with a 50 mm lens is meant to shoot the whole eclipse sequence on a single frame; of course, it will turn out to be incomplete because we missed the first 30 minutes. Last but not least, a Nikon D100 with a 35mm lens is used for “casual” imaging…

As with the total solar eclipse back in 1999, as the Sun is gradually covered by the Moon, its light dies out as during the sunset, but the color shades do not have its typical reddish cast. As time passes by, shadow outlines grow fuzzier; and during the partiality phases, light rays passing through small holes or slits (i.e. the foliage of a tree or even a simple hole punched into a sheet of paper) cast small Sun crescents everywhere. 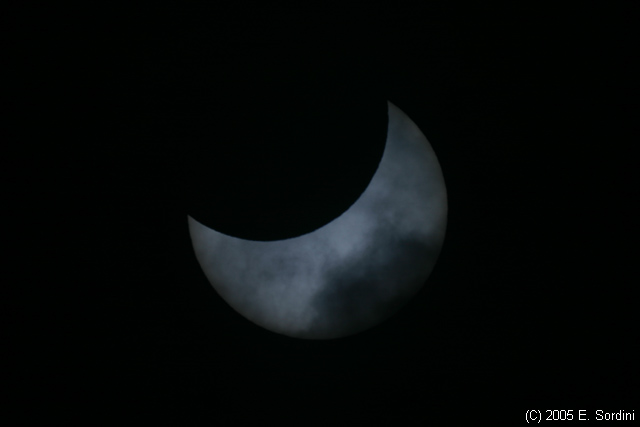 The Ring of Light

As expected, around 11.00am CEST second contact takes place The Moon, due to its angular diameter being significantly smaller than that of the Sun, gets completely engulfed into its dazzling light. The totality phase has begun, and it will last a tad more than for minutes; the ambient light reaches its minimum value. While continuously shooting the Sun (the annularity phase calls for more than 30 frames, and the whole eclipse coverage will take more than twice as many), a strange phenomenon catches my eye: all shadows have blurred contours, as if they were surrounded by strange haloes. In fact, this situation can be easily explained as follows. If we illuminate an object with two distinct light sources (i.e. two lamps) being a certain distance apart, we will get two different shadows: by generalizing, we get as many distinct shadows as there are light sources. But if we arrange all these light sources to be very close to each other at about the same distance from the object being illuminated, all the resulting shadows will be very offset by the same small amount. The ring of light made by the eclipsed Sun can be thought of as being made up by an infinite amount of separate light sources, thereby casting those fuzzy, “concentric-haloed” shadows.

As compared with the August 1999 total eclipse, a significant difference in climate behavior must be pointed out. Back then, a big temperature drop (about 5-6 °C) was recorded: this time, temperature during totality didn’t decrease that much (lowest of 13 °C from an initial value of 14 °C). This most likely happened for two reasons: cloud cover and steady wind had prevented any significant thermal increase from taking place until mid-morning, and a small amount of sunshine always reaches the ground, since the Sun is never completely obscured. Later on, I checked out the temperature records for different nearby locations on the Internet, which suggest a daytime peak not higher than 20 °C.

Unfortunately, the annularity phase is really too short: as soon as it’s over, we can have a little rest while shooting the final stages of our eclipse sequences.

Well, I must say it has been a very thrilling adventure… although we’d probably live without the vagaries of the weather :-); nevertheless, a little suspense made our trip more exciting. It surely was too short, but all our pictures of this wonderful event will remind us of it for a long time to come: everyone of us will keep his very personal memories that won’t easily fade away.

While packing up, we take the chance to have a little chat with other fellow amateur astronomers: most of them come from ouside Spain (mainly France and Germany) and have travelled all the way down to southeastern Spain to witness the eclipse. Now, it’s time to have a good Spanish lunch before starting our 1400-km trip back to Italy.

Greetings to everybody and see you all at the next eclipse!!