Discovered in the summer of 2007 by some Chinese astronomers, the comet Lulin wasnt expected to make the headlines: however, it was very well placed for observation from the northern hemisphere. In September 2008, observation led to think that it could brighten up to magnitude 4 in late February 2009, when it visibility would also be at its best.

Shortly after solar conjuction, after Xmas 2008, the new brightness estimates led to a lower maximum expected brightness of mag. 5.5-6, which is the limit for naked-eye observation under clear and dark skies. The closest approach to the Earth, at 0.41 AUs, i.e. about 60 million km, would take place on February 24, with the comet zipping across the constellation Leo (the Lion). Two close approaches with notable objects were expected: with Saturn on the 24th of February, and Regulus (aka Alpha Leonis, the brightest star of the Leo constellation) on February 28th. Here is the map with the trail of Comet Lulin through the sky (Made with Perseus): 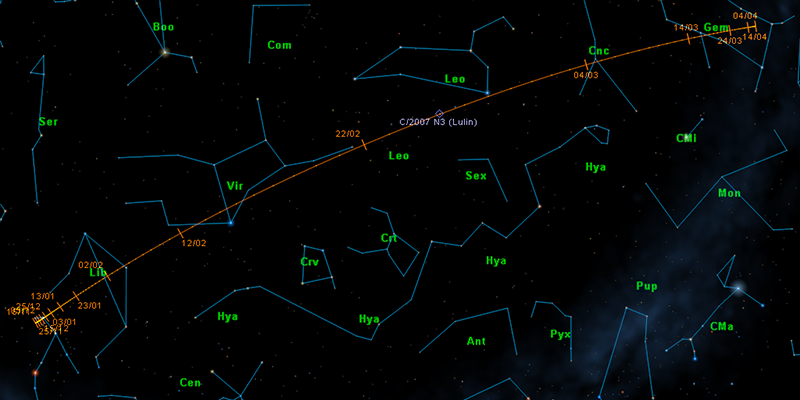 First sighting of the comet

During the first half of February, the weather doesnt exactly cooperate: fortunately the comet is still located at negative declinations, so it would be quite difficult to observe because of its low height above the horizon. Therefore, I get to make my first spotting attempt on February 18th from my backyard in a suburban area in Western Lombardy, Italy. After careful search, I manage to detect the comet with a pair of 7×50 binoculars as a faint smudge which barely stands out from the whitish sky background, about 5 degrees south/southeast of Gamma Virginis (Porrima). Needless to say, this first attempt of mine makes it clear that Ill have to drive far away under dark skies in order to observe and image the comet.

Fortunately, from mid February a strong northerly jet stream sets in, which treats the southern side of the Alpine range with a spell of dry clear weather. Only some occasional disturbances are brought by high cirrus clouds passing at very high elevation.

A quick glance at the comet ephemerides shows that the comet will be moving very quickly through the sky, which makes it way more difficult to take good-quality pictures. It will travel much faster along the right ascension direction, covering an apparent distance of almost 10° per day (in particular: -0.2 arcmin/min and +0.08 arcmin/min along the right ascension and declination axes respectively). With these figures, blurring will be clearly visible in a 1-minute exposure taken through a simple 300-mm telephoto lens. This calls for (auto)guiding to be performed directly on the comets coma.

On February 21st I get the first good chance to photograph comet Lulin: together with some friends (Giosuè Ghioldi e Lorenzo Comolli), we climb onto the Ligurian Apennines. Despite some pesky cirrus cloud banks, the sky is quite clear, and the comet is easily visible to the naked eye. A 1-degree tail pointing southeast can also be seen through Lorenzos 20×110 giant binoculars. For sure this is a very good opportunity that cant be missed. Therefore I take several pictures with my Baader-modified Canon 350D camera at 800 ISO, with my Vixen ED scope riding on a FS-2 powered Losmandy G11 mount. 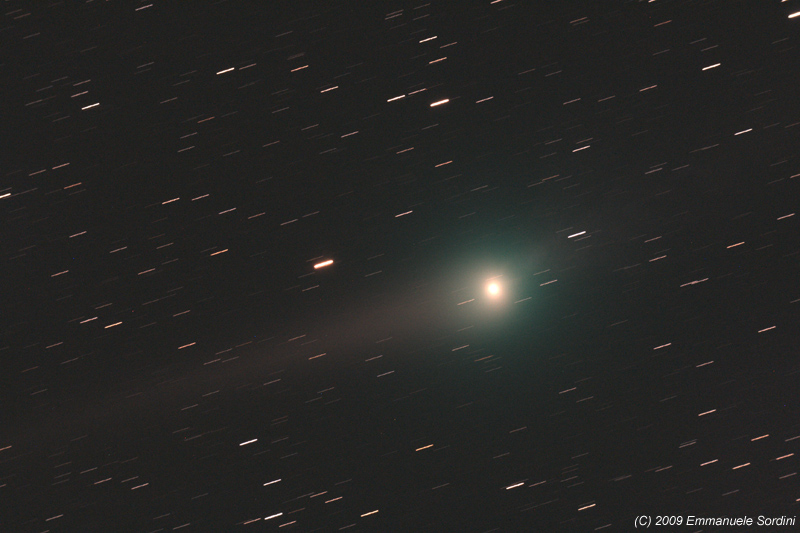 As usual, combining many subframes together yields much better results:

Comet Lulin, Feb. 21, 2009: 50-min total exposure (five 10-min subframes) through a Vixen ED 103SWT refractor; other info as the picture above: Maxim DL was used to align the frames on the comet. 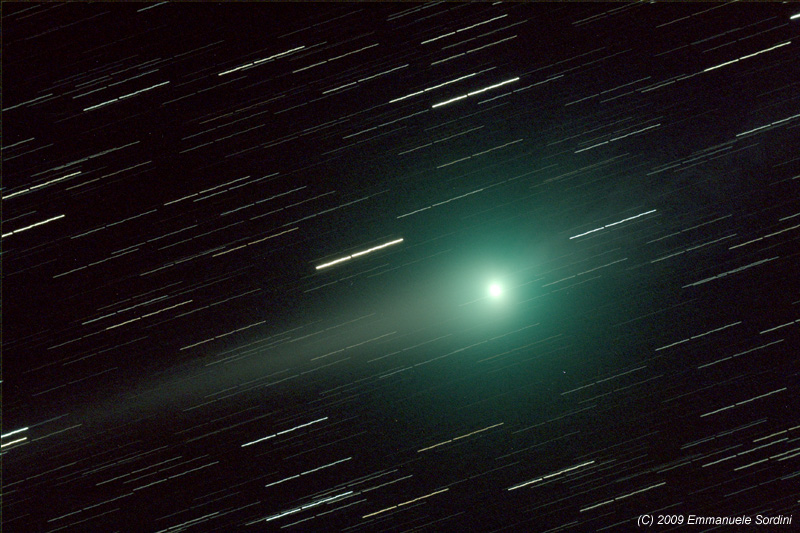 As I said before, comet Lulin turned out to be no big deal for sure: but nevertheless, it sported a notable feature which is rarely visible on comets. The geometric circumstances of this fly-by made it possible to observe a very bright anti-tail, which becomes visible when the Earth crosses the comets orbital plane.

A combination of black-and-white conversion and digital filtering makes it possible to bring out the faint details of the dust (anti)tail and the ion tail: 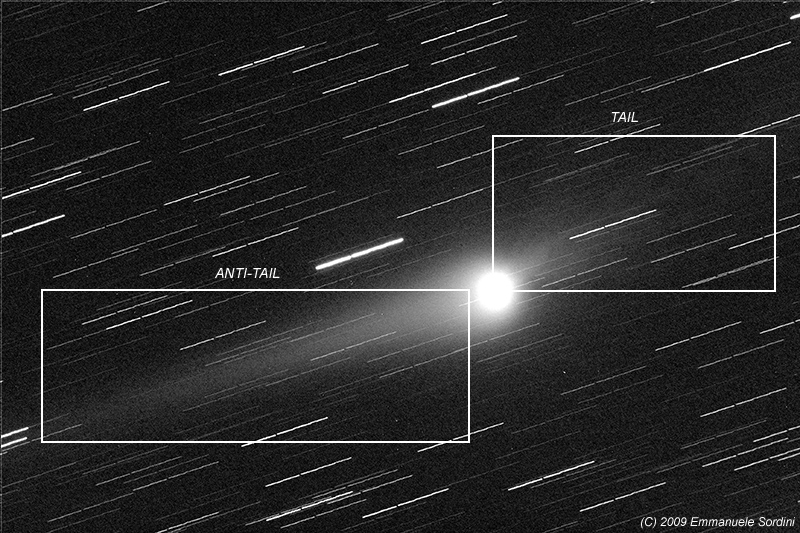 Close encounter with the Ringed Planet

On the night between Feb. 23rd and 24th, comet Lulin is expected to zip past Saturn, in the constellation Leo, at a minimum angular distance of around 2 degrees; however, this time Ill have to make do with my light-polluted backyard. Fortunately enough, a cold front hits the Alps quite hard but brings along strong foehn winds on the leeward side (that is, on most of Northern Italy) which yield very clear skies. So, I manage to snap a bunch of pictures of comet Lulin just after midnight local time. Since my 800-mm Vixen scope wont get the two objects within the field of my Canon camera, its time to use my 480-mm f/6 NT refractor:

Comet Lulin, 24/02/09: 2-min exposuer with my NT80 refractor; processing with DeepSkyStacker, Maxim DL and Photoshop CS3. The star to the upper right is actually Saturn. 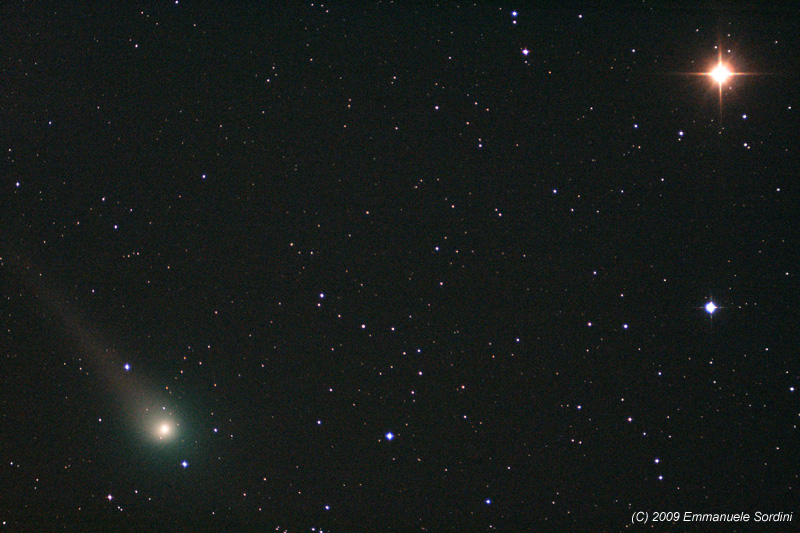 Unfortunately, light pollution quickly fogs my pictures and keeps me from shooting exposures longer than 2-3 minutes; anyway I easily manage to photograph the fly-by. Note that Saturn has a star-like appearance in this picture, because of the relatively wide-field optics I had to use in order to fit both the comet and the planet in the same field.

Looking at the bare figures for the comets motion across the sky, one could understand how fast it could be. But it was not until I put my eye in the eyepiece, that I really appreciated its speed for myself! One could easily realize the comets displacement with respect to the background stars in a matter of a few minutes. So put some 2-minute pictures together into taken within a 20-minute timespan into this movie:

Amateur astronomers from throughout the northern hemisphere could follow comet Lulin until late March, when it had considerably dimmed from its peak brightness. Unfortunately, other commitments prevented me from devoting further time to imaging this comet. For much the same reason, I missed the subsequent rendez-vous with Alpha Leonis (Regulus) and other celestial objects. Anyway, I think this nice little comet put on quite a good show for our delight!

Last but not least, as is always the case with this kind of celestial phenomena, the mass media were chock-full of incorrect information. For example, comet Lulin was called the bright Green Comet countless times. This fooled the public into thinking that it would be easily visible to the naked eye with its greenish tint even from urban areas. Whereas we all know that even with 20/20 sight, a pair of binoculars was needed to barely make out the comet from the background sky as a whitish smudge!