Over the last years, the digital camera market has shifted towards mirrorless cameras which, lacking the whole pentaprism + flip mirror assembly, are more compact than DSLRs and have a much shorter backfocus. All main players now offer a mirrorless product line, relegating DSLRs to a bunch of models or even discontinuing DSLR production altogether.

Digital cameras have long been known to deliver good results in astrophotography applications, with the limitation of being relatively blind to emission nebulae (H-alpha line at 656.3 nm wavelength), which often calls for invasive mods such as replacing the IR-cut filter in front of the detector. Such mods void the warranty and can limit usability for traditional daytime photography.

First of all, we have to make sure the model we have our heart set on can deliver adequate performance. Maker specs are generally too vague to make an informed decision, so that a consistent and quantitative method is needed to evaluate and compare different camera models. Renowned French amateur astronomer Christian Buil, a digital imaging pioneer since the early ‘80s, described a quantitative testing protocol for digital cameras on his website than can be used for assessing specific parameters such as dynamic range, readout noise, etc., akin to what is done with scientific CCD or CMOS cameras. This is the only reliable way of comparing camera performance. A few years ago, renowned Italian amateur astronomer (and good friend of mine) Lorenzo Comolli developed his own, partly automated version of Buil’s testing protocol by using Maxim DL and MATLAB. Lorenzo put up a very interesting page on his website containing all of his digital camera test results.

Lorenzo’s latest tests date back to 2016 and were performed on cameras released even earlier, such as the Sony A7s or the Sony A6000, both of which came out in 2014. It’s been a long time, especially from a technology standpoint, so I was really keen to “gage” the progress made over the years. I recently got hold of a Canon EOS R6, a mirrorless camera featuring a full-frame 20 megapixel detector and 14-bit readout. The base specs are comparable to that of  the Canon EOS 6D, which is very popular among astrophotographers but dates back to almost a decade ago.

Lorenzo’s procedure had some problems in the beginning, because Canon’s raw format has since evolved from CR2 into CR3. Luckily PixInsight came to the rescue, so I managed to convert CR3 raw frames into traditional FITS files, thereby making this test possible. It’s worth pointing out that the brightness level in the flat field panel used for this review was not perfectly steady, but this did not jeopardize the result. Below is the first plot, showing gain as a function of ISO sensitivity, yielding a ISO at unity gain value of 705 ISO for the Canon R6. 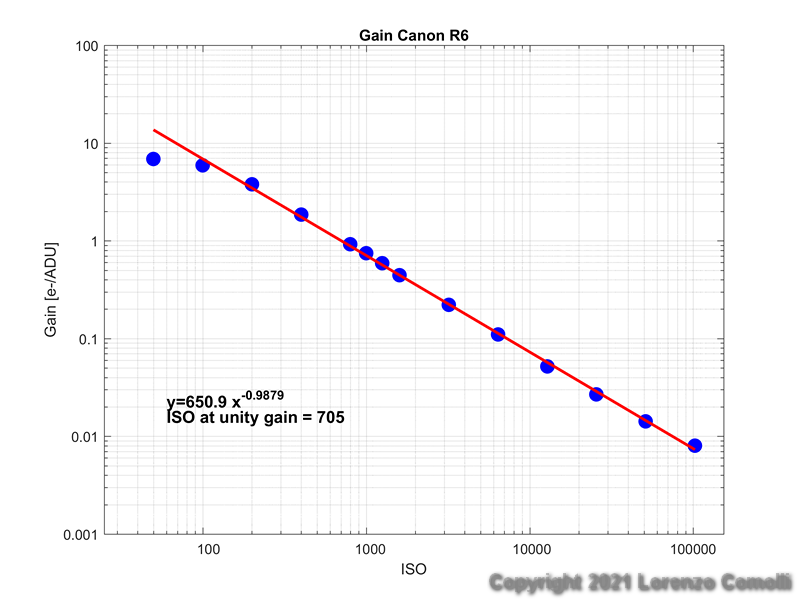 Next, we measured readout noise. Without going into much detail, suffice it to say that read noise represents the proportion of noise caused by electronics during the detector reading process, i.e. during the conversion of electronic charge collected by each pixel into intensity levels, the so-called ADUs. This noise component is inherent in the camera and cannot be removed, so the lower it is, the better. The R6 yields the best readout noise value (1.26 e-, which is very good) at 12800 ISO. Upwards of 6400 ISO, readout noise keeps constantly below 2 e-. 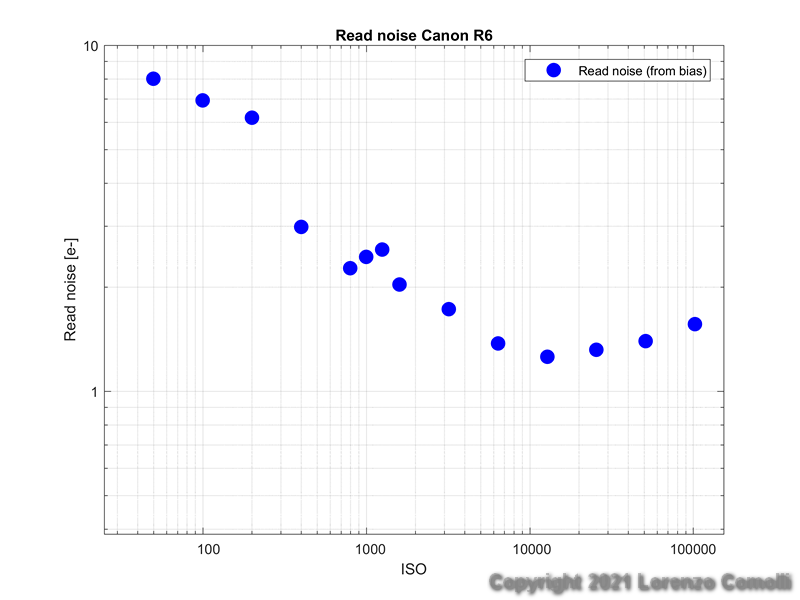 The highest recommended ISO setting is the one that minimizes readout noise without compromising dynamic range too much. In the case of the Canon R6, 6400 and 12800 ISO both meet this requirement.

Another very important parameter is dynamic range, i.e. the ratio between the maximum and the minimum intensity level the camera is able to detect. In practical terms, dynamic range is equivalent to exposure latitude: the higher, the better. Dynamic range is commonly measured in dB on a logarithmic scale. The best dynamic range delivered by the EOS R6 is 82.6 dB at 100 ISO and 50 ISO. Actually, the 50 ISO image is shot at 100 ISO, thereby yielding an raw file identical to the 100 ISO one. The only difference is that when the image is saved in JPG format, brightness values are algebraically divided by two. 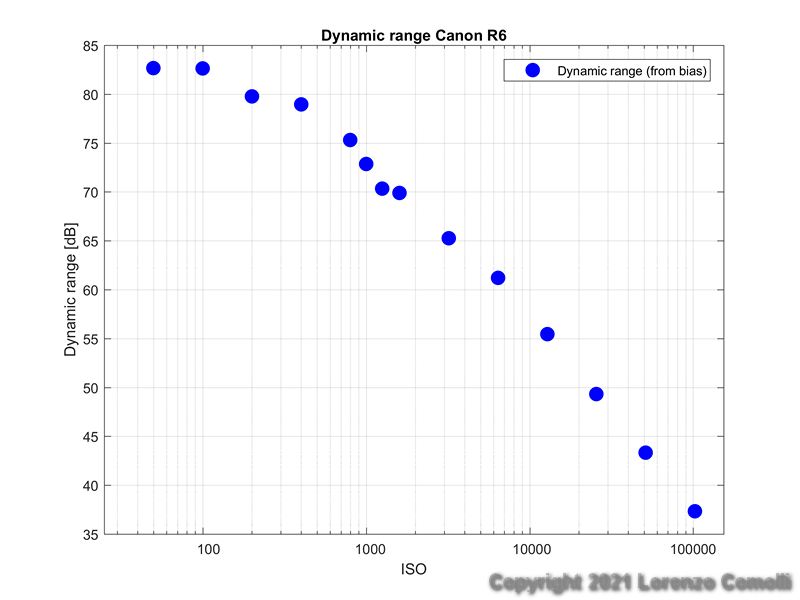 Histogram profiles at different ISO settings are quite smooth: there are no noticeable gaps or artifacts. This means that raw is true raw, as is Canon’s long-standing tradition. 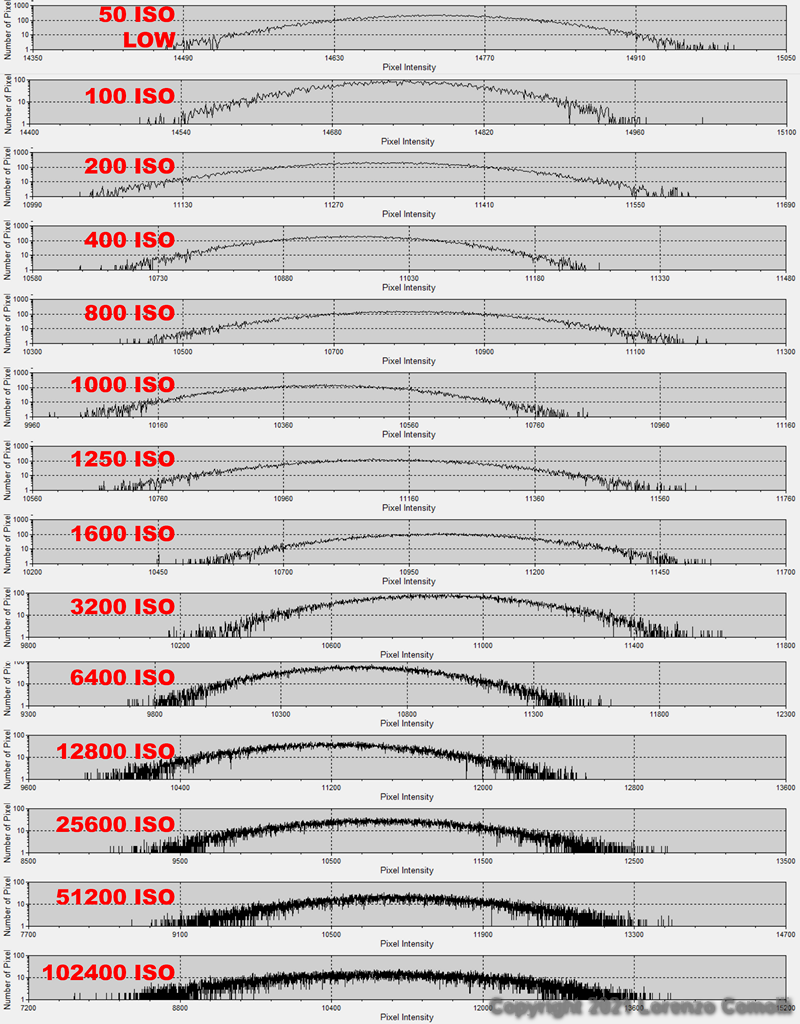 After seeing the raw figures, one might easily be wondering how the R6 stacks up against its competition. For a more comprehensive comparison please refer to Lorenzo’s website. In this article, I will focus on two well-known full-frame cameras: the Sony A7s, renowned for its impressive high-ISO performance, and the Canon 6D, a DSLR that has long been very popular among amateur astronomers. Let’s compare the numbers in the table below:

What does this comparison tell us? The R6 can boast an impressive dynamic range, on a par with that of the A7s, while the Canon 6D lags far behind. Moreover, the R6 also sports a low  readout noise. The highest recommended ISO value is lower than that of the A7s, but this is not necessarily a bad thing: in fact, it allows low noise imaging with the plus of having a wider dynamic range.

The Canon R6 shows a clear improvement over the 6D, and can give the A7s a run for its money. The A7s has bigger pixels (8.32 vs 6.54 um) and, above all, Sony’s raw format is not true raw, with some noise reduction very likely being applied behind the scenes at high ISO settings, so the R6 is the clear winner here. It would be interesting to test a more recent Sony model to check whether this problem still holds. Anybody willing to help me find an answer to this question, please come forward!

To sum up, the Canon EOS R6 proved to be a very good camera and definitely showed the progress made in technology over six years. Canon’s raw format is true raw and the R6 is no exception. Therefore, this camera seems to be very promising for astrophotography. I really look forward to testing it out in the field soon!

I acquired the test and calibration frames myself, while Lorenzo Comolli produced the analysis and the graphs. Many thanks to Edoardo Radice for helping me out with PixInsight. But an even bigger thanks goes to Alessia Monaco for lending me her R6 and thus making this test possible.